More for you |
2021 DS 9 luxury car revealed: price, specs and release dateWhat is GAP insurance and how much should you pay for it?Why does the new Hyundai i10 get five stars?New MG ZS EV vs new Renault Zoe2020 Jaguar XE long-term test review
Home
News
Frankfurt 2009: Lexus LF-Ch
news 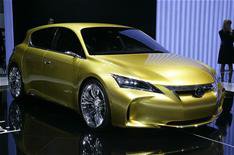 What is it?
A concept car version of Lexus' rival for the BMW 1 Series and Audi A3.

Whats new?
Lexus reckons that small hatchbacks like the Audi A3 and BMW 1 Series are where premium-car sales will be found in the future and is preparing to move in.

The LF-Ch concept car on display at the Frankfurt show is the forerunner to a production car that will be made from the end of next year and, being a Lexus, it's a petrol-electric hybrid.

The company recently removed most non-hybrid models from its UK range and this philosophy is expected to continue when the five-door LF is launched.

'Hybrid powertrains put us in a good position where current and future emissions legislation is concerned,' a Lexus UK spokesman said. 'People who drive diesel cars now won't be quite so keen when new regulations on NOx (nitrous oxide) and hydrocarbons come into force.

'We're already getting astonishing miles-per-gallon and CO2 figures from hybrids, and there are also refinement and quietness advantages compared with diesels.'

The LF has a similar drive system to other hybrid Lexus models, which means it is capable of running on electric power alone with zero emissions for short distances at city speeds, petrol power for highway cruising and a combination of both when strong acceleration is needed.

Lexus says that the LF 'raises the bar in the premium class' and also gives hints about the new design direction that the company intends to take.

The production version is expected to change little from the car that makes its debut here. At 430cm long, it's just a fraction longer than the BMW 1 Series and it's exactly the same height, at 140cm.

It uses the latest example of what Lexus calls its L-finesse' design philosophy. At the front there's a more dramatic version of the current Lexus grille, while the complex bumper shape is likely to be simplified for the production car.

The concept car also has rear door handles integrated into the window trim, but it's unclear whether this is a feature that will make it through to production. The trailing edge of the roof overhangs the rear window to create in integrated rear spoiler, while the rear bumper is shaped to smooth airflow from beneath the car and direct air to the rear brakes.

The LF-Ch's minimalist cabin creates a visual harmony between the interior and exterior design', according to Lexus. There's an asymmetric dashboard layout and switches are kept to a minimum thanks to a multi-information display on top of the dashboard that controls a number of different functions.

How much will it cost?
The production version of the LF-Ch is expected to go on sale in late 2011. It's likely to be well equipped and we estimate prices will start at around 20,000.

Verdict
Lexus needs a wider range of models to compete with BMW and Audi this is a step in the right direction.