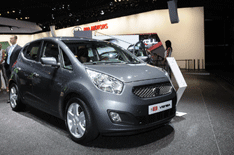 What is it?
It's Kia's take on the mini MPV think Citroen C3 Picasso and Nissan Note and is the production version of the cracking-looking No3 concept car shown at the Geneva motor show earlier this year.

What about engines?
The Venga will come with a choice of a 1.4 or 1.6 petrol engines or two diesel engines again in 1.4 or 1.6 guises. The diesels have a six-speed gearbox, while the petrols have a five-speed transmission. The 1.4 petrol can be specified with a four-speed auto.

Kia's intelligent engine stop-start system will be available on all four engines.

The 1.4 diesel, mated to a six-speed gearbox, has carbon dioxide emissions of 117g/km, so running costs should be low.

Other fuel-saving features of the new Venga include a power-saving alternator management system, gear-shift indicators to encourage a more economical driving style and low rolling resistance tyres on cars fitted with 15- or 16-inch wheels.

Practical interior>
Expect a bright and airy cabin on some models, thanks to a tilt-and-slide all-glass panoramic roof, while all versions will have a 60/40 split rear seat that folds flat into the floor.

It's spacious too, with Kia claiming best-in-class legroom space in both the front and rear.

When will it be on sale and how much
It will be on sale in the UK early next year. However Kia has yet to decide if its UK-spec cars will get all four engines and finalise UK trims, so no word on prices yet.