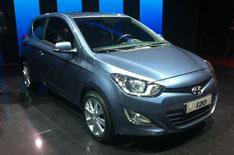 The new Hyundai i20 has been revealed, days before its public debut at the Geneva motor show.

The i20 face-lift includes a string of mild styling tweaks, designed to bring the Ford Fiesta-rival more into line with recent models such as the i30 and i40.

It sits on the same chassis as the outgoing model, so it shares the same wheelbase, height and width; however, the different front and rear bumper designs extend the cars overall length by 55mm (30mm front, 25mm rear), to 3995mm. That means the i20 is now around 5cm longer than a Fiesta.

The biggest revisions come in the engine line-up, which now features two new diesel motors alongside the current 1.2- and 1.4-litre petrol units. The most radical of the new engines is a 1.1-litre, three-cylinder diesel, which produces 74bhp and 125lb ft of torque, and emits just 84g/km of CO2.

Theres also a revised version of the current 1.4-litre 89bhp unit; it gets efficiency gains that bring its CO2 emissions down from 111g/km to 96g/km.

The face-lifted i20 is due on sale in May; prices are expected to stay close to those of the current model, so expect entry-level versions to start from just under 10,000.