The original Toyota Yaris of 1999 broke the mould for small cars, with daring design details such as a digital speedometer housed in a pod in the centre of the dash. While it’s true to say the Yaris has become more conventional over the years, as reviewed here in third-generation guise it still represents solid value for money, particularly for those who rate reliability over driving dynamics.

However, the Yaris does stand out from rivals because of the availability of a petrol-electric hybrid version, which loses out on some boot space but promises green credentials. The only other hybrid alternative in this class is a mild hybrid Suzuki Swift, although it isn't quite as economical as the Yaris because it cannot be powered by the electric motor only.

Petrol engines in 1.0-litre and 1.3-litre capacities, plus a 1.4-litre diesel, make up the rest of the range. We like the livelier 1.3-litre unit paired with the easy-shifting five-speed manual gearbox (Toyota’s Multidrive S CVT automatic is fine around town but provokes a lot of engine noise under hard acceleration). From 2017, a 1.5 petrol replaced the 1.3; it should be slightly more fuel efficient and cleaner. It’s noticeably faster than the 1.0 and is therefore better for those who regularly tackle longer journeys.

The light steering is good for town driving, but it doesn’t inspire as much confidence on the open road as the more informative steering you get in rivals such as the Ford Fiesta, Volkswagen Polo and Mazda 2. Similarly, ride comfort lags behind the Fiesta's; although the Yaris is far from unbearable, you feel more thumps and bumps through the suspension. There’s a bit of wind noise at motorway speeds, too.

The Yaris is one of the roomier cars in its class, with plenty of interior space for those in the back, helped by a completely flat floor. There’s lots of head room up front, although the dashboard design is a little basic.

Boot space matches the Fiesta's but falls short of that in the Skoda Fabia and Honda Jazz. Furthermore, you have to make do with a large step in the floor of the boot when the rear seats are folded down.

Initially, the Yaris was available in T2, TR, SR and top-spec T Spirit trims. Entry-level T2 models lacked air conditioning, so it’s worth upgrading to TR for additional features such as electrically controlled door mirrors, a reversing camera and a touchscreen system. Higher up in the range, other trims included sat-nav, a panoramic glass roof and dual-zone climate control.

The range was revised in early 2014 to entry-level Active, mid-range Icon and the short-lived Icon Plus and Trend models. That’s because the latter two made way for Sport and Excel trims later in that year. A more affordable Active version of the hybrid was introduced in 2015; this included some desirable extras, such as climate control, normally reserved for higher-spec models.

Further alterations came in 2017 with Bi-Tone models being offered. They feature two colours on the outside, with a similar two-tone treatment given to the dashboard and door cards. In 2018, a hotter GRMN Yaris was added to the range with revised suspension and a 212bhp 1.8-litre engine. It’s a real giggle to drive but is too raucous and one-dimensional in its character against more sophisticated rivals. 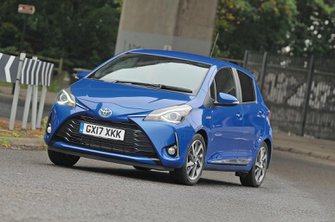