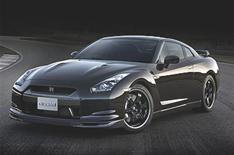 The first Nissan GT-R supercars are still a few months away from arriving in the UK, but a hotter version of the car has already been revealed.

The Nissan GT-R Spec V is lighter version of the standard car, and will be available in Europe later this year.

The Spec V will use the same 485bhp twin-turbo V6 engine, but will also have a special boost control button, increasing the 434lb ft of torque by an extra 15lb ft from 3500-5000rpm.

At 1680kg, the Nissan GT-R Spec V is 60kg lighter than the standard GT-R. The cut in weight has been achieved by removing the rear seats, rear spoiler, front grille, as well as using lightweight 20-inch alloys and carbonfibre for the brake ducts. The exhaust is made of titanium.

Sports seats have been fitted, while carbonfibre has been used for much of the car's interior.
The Spec V uses lightweight carbon-ceramic brakes that Nissan claims will develop a braking force of up to 2.0g the standard car builds 1.4g.

Nissan plans to build 20-30 of the cars a month, with prices in Japan starting at around 112,000 - almost twice the price of the standard Nissan GT-R.