* Part coupe, part crossover * On sale this year, from around 17.5k * Asymmetrical door layout, but better than Mini... 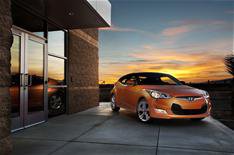 One of the more interesting cars that will appear at the Geneva show next month is the Hyundai Veloster, which is making its European debut.

Part coupe and part crossover, it follows the Mini Clubman by having two doors on one side and only one on the other but unlike the Mini, the two doors will always be kerbside, regardless of market.

When it arrives in the UK, the Veloster will be 'priced between the Renault Megane Coupe and VW Scirocco', according to Hyundai sources, who describe the car as 'a utility coupe'. That means you'll need between 17,500 and 18,500 for the car.

It is based on the architecture that underscores Hyundai's i30 compact
car range and the Cee'd family from partner company Kia.

The Veloster wears Hyundai's new corporate nose, unlike the 2007 concept car, which preceded it, and has conventional rear lights and a hatchback.

The interior has been completely rethought, too. It uses a new centre console design that will make its debut in Hyundai's i40 family car.

Taking cues from the Audi TT, the styling of the Veloster cabin is particularly impressive and benefits from notably high-quality materials.

Initially, the Veloster will be available with two 1.6-litre engines.

The more powerful unit generates 138bhp and 123lb ft of torque and comes hooked up to a six-speed manual gearbox.

The less powerful engine has 130bhp and 117lb ft of torque. It is connected to Hyundai's first dual-clutch transmission. Company engineers expect 5-6% better economy than would be achieved with a manual 'box.

A stop-start system will be standard and bring emissions down to around 130g/km.