Hyundai Veloster: who's going to buy it?

* Veloster to be targeted at VW Scirocco in UK * Car's name revealed at Detroit motor show * Vote in our Car of the Year poll... 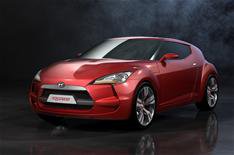 Hyundai's exciting Veloster concept car from 2007 will become a production reality in just under a year's time, but it's already exposing huge cross-cultural differences between Europe and America in the way it will be marketed.

The Americans see it as a rival for Toyota's Scion brand, and will target it at the under-20s, including wealthy college graduates.

In the UK, where students have the more pressing concerns of tuition fees and student debt to worry about, the Veloster will be aimed at the Volkswagen Scirocco, Renault Megane Coupe and the forthcoming Vauxhall Astra GTC.

'We could see 50-year-old women who regard themselves as being young at heart buying it', said one senior Hyundai Motor Europe figure.

The production model will make its public debut at the Detroit motor show next month, when its final name will be announced. Most of the world is believed to favour sticking with Veloster, but the Americans are said to be vehemently opposed to this. It is currently known under the code-name FS.

Its existence is down to public clamour following the concept car's unveiling at the 2007 Seoul motor show. 'That car was a study project not intended for production,' admits Casey Hyun, Hyundai's creative design manager.

No suicide doors
The showroom model will have three side doors like the concept car, and on right-hand-drive versions the side with two doors will be closest to the kerb, in stark contrast to the Mini Clubman, which has two doors on the right regardless of market.

The car is based on the Kia Cee'd/Hyundai i30 platform and has been designed with functionality, style and price as the chief considerations. It has undertones of the Nissan Juke and Kia Soul, with a black front screen pillar that makes it look as though there is an unbroken expanse of glass around three sides of the car, and a strong character line around the bonnet.

The interior adopts a 'sports activity' theme partly inspired by motorcycles, as in the Juke.

The Veloster will be the first Hyundai to use the semi-automatic double-clutch transmission developed by Hyundai-Kia, paired with the group's 1.6-litre 140bhp direct-injection petrol engine although there's no word at this stage about whether other powertrains are under consideration.

Hyundai says that with its youthful target audience it puts fun before comfort and economy before performance, and will offer features such as a panoramic sunroof, a premium audio system, Bluetooth and sat-nav as well as sockets to connect a wide variety of electronic devices.

It will be launched simultaneously around the world in the final quarter of next year.

2011's most exciting car you decide
The Hyundai Veloster is one of the contenders in our Car of the Year poll. Vote now for the car you think will be the most exciting in 2011. Click here.