* First photo of Hyundai's new Scirocco rival * Veloster due to go on sale late this year * Three side doors, two on the kerbside... 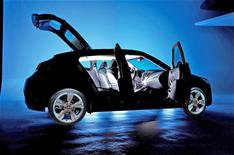 Hyundai has revealed the first photograph of its Veloster coupe, which will go on sale late this year to rival cars such as the Volkswagen Scirocco.

The new car will be unveiled at the Detroit motor show next week and is based on the original Veloster concept car from 2007.

Like the Mini Clubman, the Veloster will have three side doors, with two located on the right hand side in the UK unlike the Mini's layout.

Based on the i30 small family car platform, the Veloster has hidden pillars for an uninterrupted look to the glazing and will come with upmarket options such as a powerful sound system and panoramic sunroof.

The Veloster will be the first Hyundai to use a new semi-automatic double-clutch transmission developed by Hyundai-Kia, paired with the group's 1.6-litre 140bhp direct-injection petrol engine. There's no word at this stage on whether other powertrains are under consideration.