More for you |
Best used coupes for less than £25,000 (and the one to avoid)Deal of the day: Jaguar XK2014 Jaguar XK Dynamic R reviewJaguar XK production to end in the summerJaguar - 60 years of the XK
Home
News
Jaguar XK Coupe 5.0 V8 review
news 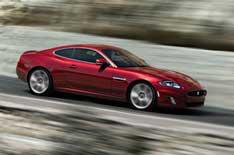 What is it? Jaguars high-performance XK coupe has been given a mid-term face-lift.

The updated XK has slimmer headlights, which now use intelligent LED technology. They sit above a larger grille and a redesigned bumper, while the front wings also have a new shape. The rear lights have new LED details, too, while there are new alloys, too.

Other changes include the choice of five new exterior colours, while new trim finishes and the option of sports seats help to freshen the interior.

Whats it like to drive? The engine and suspension remain unchanged, which is no bad thing.

The six-speed automatic gearbox is smooth and unobtrusive on upshifts, but jerkier when changing down. The paddle shifters allow for more user input, but there's no option to lock the transmission into a purely manual mode.

The ride is firm, but smooth, and the steering is responsive and well-weighted. Its engaging when you want it to be, yet doesnt compromise comfort at lower speeds.

Whats it like inside? There is a glorious feel of quality to the XKs cabin, as you'd expect. However, the navigation and entertainment systems, along with some of the plastics, are not quite up to the same standard.

The cramped rear seats are useless for anything other than a few small bags. However, treat the XK as a two-seater and there's plenty of room for all-comers.

Should I buy one? The XK already did pretty much everything youd expect of a big, sporty coupe, and the visual alterations help keep it fresh alongside rivals such as the BMW 6 Series and all-new Porsche 911.

Its expensive to buy and run, but for most XK buyers that won't stop them signing on the dotted line.