* Large SUV concept car at Chicago motor show * Called the Cross GT * Larger than the Sorento; not expected in Europe... 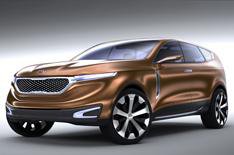 This is the Kia Cross GT concept car, which has been unveiled at the Chicago motor show.

The large Kia SUV concept is based on the Sorento, but is 21cm longer, 12cm wider and 4cm shorter. Therefore, it's expected that any production model will sit above the Sorento in Kia's range.

The concept car is powered by a 3.8-litre V6 petrol engine that's supplemented by an electric motor producing a combined power output of around 400bhp. The Cross GT can travel up to 20 miles in electric-only mode; however, Kia hasn't released fuel economy figures.

Kia says the hybrid set-up, combined with an eight-speed automatic gearbox and four-wheel drive, could make it into a production vehicle. However, the hexagonal glass panels in the Cross GT's roof look less likely to do so.

The concept car has rear-hinged doors and four bucket seats in its cabin.

A spokesman for Kia said that there are no plans to bring any production version of the Cross GT to the UK.