* If there's a market for sportscar, Kia will build it * MX-5 rival being considered * Small performance car at Detroit... 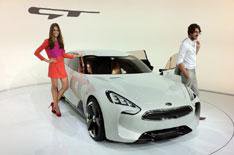 Kia's stunning GT concept is a clear indication that the company wants to produce performance models, design director Peter Schreyer has revealed to What Car?

'If the business case is there for a four-seat performance coupe, we will build it,' he admitted. Company insiders also said that Kia needed to do such cars to improve its image globally and establish itself as a 'dynamic, youthful brand'.

Another new model being considered is a Mazda MX-5 rival and Schreyer also revealed that he and his team will be showing another, smaller performance car concept at the Detroit motor show in January.

Coming sooner though will be hotter versions of both the next C'eed and new Rio. Both will have turbocharged four-cylinder engines in a bid to compete with both the Golf GTi and Polo GTi.