* Frankfurt motor show stars * On sale over the next few months * View them here... 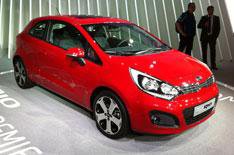 Kia has revealed its new Rio 3dr at the Frankfurt motor show. The Kia Rio 5dr was launched earlier this month and the three-door version will offer lower prices and a slightly different model line-up.

Running costs should also be pretty similar, with CO2 emissions expected to be as low as 85g/km and fuel consumption as impressive as 88.2mpg in the Ecodynamics model.

The model line-up is yet to be finalised, but Kia says that theres likely to be an aggressively priced entry-level model, then a choice of either sporty or luxurious trim.