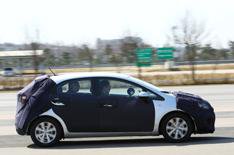 The Rio is Kia's new supermini that's based on its parent company's Hyundai's i20, but with some significant differences, including a slightly longer wheelbase. There are four engines that could come to the UK: 1.2- and 1.4-litre petrol units and 1.1 and 1.4 diesels, delivering between 69- and 107bhp. With engine stop-start, the 1.1-litre diesel's CO2 emissions will be as low as 85g/km.

When can I get it?

September or October for the five-door version and early 2012 for the three-door option, which is being restored to the range.

What will it cost me?

Kia would like the base version to start at around £10,000, but there's some hard bargaining to be done before that becomes a certainty.

What's good about it?

The new Rio car was unveiled at the Geneva motor show earlier this month, so we could already vouch for its appealing looks and enticing interior. Now, after a brief drive of a disguised prototype on a Korean test track, it's possible to add to that list of attributes. Cabin space, for instance, could well be class-leading, and the car feels light on its feet, nimble and poised when changing course, but it will take the UK's abysmal roads to demonstrate whether it also rides well. First impressions are good, though. The car we drove was powered by the 1.1-litre three-cylinder diesel, which does a respectable job but sometimes a little vocally.

The steering is a bit too keen to self-centre and delivers next-to-no feedback, although this last point would be unlikely to a problem as far as the majority of supermini buyers are concerned. At this stage we don't know which engines are destined for the UK: for instance, if Kia were to make its stop-start system standard, CO2 emissions with the petrol engines and the larger diesel could be so low that the 1.1 would be an expensive irrelevancy in the UK.

The new Rio is aimed at the Ford Fiesta and Citroen C3 rather than cars at the purely value end of the supermini spectrum. This may in part be in reference to the way it looks and the things it will be able to offer from automatic headlights to a heated steering wheel as much as how it drives. If you think the five-door looks good, wait until you see the still-secret three-door.

Who has What Car? helped this month – September 2017