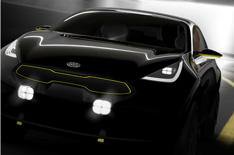 Kia is to unveil a small SUV concept at the Frankfurt motor show in September, to potentially rival the Nissan Juke.

Although Kia already builds the similarly sized Venga, there are no plans for the new concept to replace it. Instead, the new model would sit alongside the existing range.

Production has not yet been officially confirmed, but a roadgoing version is expected within four years.

Kia's vice-president Benny Oeyen has previously told What Car that Kia is looking at producing a rival to the Nissan Juke.

'We enjoy a good reputation with SUVs with Sorento and Sportage so I think we can capitalise on that with a smaller SUV,' he said.

Although there is no information on engines or specifications for the concept car, Oeyen has already suggested that a production version is likely to be four-wheel drive.