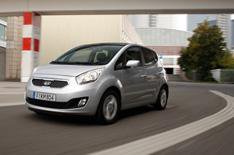 It's yet another supermini-sized car from Kia, that's what. While the Rio is the conventional hatchback and the Soul is, well, who knows what, the Venga slots into the range as a small MPV.

When it goes on sale in February, it'll take on cars such as the Nissan Note, Renault Modus and Vauxhall Meriva.

All the MPV elements are present plenty of interior space, a big boot and sliding rear seats, so you can alter the bias between the two.

It all works quite well, and four people will be perfectly happy sitting through a long journey if they don't need to bring too many bags rear legroom is a little short with the back seats slid forwards.

Up front, there's a high driving position and a well-ordered dashboard that looks funky and surprisingly classy.

The shiny wiper stalks and ill-fitting glovebox lid betray the quality slightly, but everything else looks and feels pretty slick particularly the switchgear.

Generally, it's pretty comfortable. The suspension does a good job of taking the sting out of big bumps, but the ride can feel a little bit knobbly on more ordinary surfaces. The tall body leans quite a bit in corners, and the steering has virtually no feedback, but there's plenty of grip.

Three engines will be available. The best we've driven is the 89bhp 1.4, which is punchy and suits the car. We'd avoid the 89bhp 1.4-litre diesel it's not particularly flexible and there's too much noise and vibration.

We haven't driven the 123bhp 1.6-litre petrol yet, which is only available with an automatic gearbox.

Stepping up to the 2 model adds alloys and a leather steering wheel with audio controls, while 3 models have climate control, front foglights, powered rear windows and a sunroof.