More for you |
Used Ford Fiesta long-term test reviewWhat can I do about a security issue on my car? Best cars for less than £250 per monthWhy is my new car’s fuel economy so poor?Top 10 used electric cars
Home
News
Kias green future revealed
news 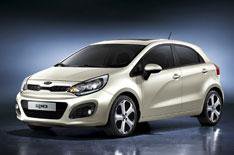 Kia has vowed to become the producer of the world's most fuel-efficient cars, with a raft of new green models coming in the next three years.

By 2014, the Korean company will have launched its first hybrid in Europe, a fully electric car and a host of modifications to existing models and technologies.

The first of these to arrive will be an Eco Dynamics version of the forthcoming Rio supermini. It will be powered by a 74bhp three-cylinder 1.1-litre diesel engine, and will be 36kg lighter than the standard version. Combined with engine stop-start technology, this means that the Kia Rio Eco Dynamics will average 88mpg and emit just 85g/km of CO2. Similar treatments are expected for other future models.

Kia is also pressing on with the introduction of downsized turbo petrol engines across its range. The existing 2.0-litre engine will be replaced by a 213bhp 1.6-litre turbo and the current 1.6-litre becomes a 128bhp 1.2-litre turbo. Both will bring considerable improvement to economy and emissions, especially when used in conjunction with Kias first double-clutch semi-atuo gearbox that's in development.

Unlike the model that's already on sale in the US, the European version will have a 2.0-litre petrol engine allied to an electric motor, going through a conventional auto 'box. Pricing is yet to be decided, but a senior company insider predicted that it would be close to that of the Toyota Prius.

Kia has also announced plans to produce a fully electric car for the global market by 2014. Details are scarce, but it's likely to be an electric version of the next-generation Soul.

A plug-in hybrid model will follow the electric car and a model powered by fuel-cell technology is also in development.