More for you |
Every 5-star car on What Car?Used test: Maserati Levante vs Porsche MacanNew issue of What Car? magazine on sale nowMost and least reliable small SUVsRevealed: the car makers whose discounts have got bigger since lockdown
Home
News
Lexus CT200h
news 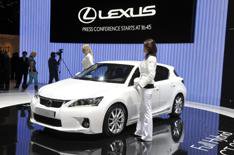 This is Lexus's CT200h hybrid, which was revealed at the Geneva motor show today.

What is it?
Is the Toyota Prius not posh enough for you? Audis 109g/km A3 too 'dirty'? Then the petrol-electric hybrid Lexus CT200h could be just what you're looking for.

New hybrid joins the class
Developed from the LF-Ch concept car, the CT200h is heading straight for Audi A3 and BMW 1 Series territory, where it will become the first hybrid in the class.

Full performance details havent yet been confirmed, but with a combined power output of 134bhp, it should manage 0-60mph in around 10 seconds. The target for CO2 emissions is 95g/km, which suggests potential average economy of more than 70mpg.

There are four driving modes, including EV for short distances on battery power alone. The Eco mode tones down its throttle response and air-con for better economy. Theres also Normal and Sport where traction and stability controls are eased back and the instrument panel backlighting switches from blue to red.