* Sporty, four-wheel-drive hybrid * Retuned suspension and handling * Due in the UK during 2012... 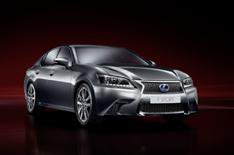 This is the Lexus GS F Sport hybrid, which will be unveiled at the SEMA show in Las Vegas next month.

Compared with the GS 450h that made its world debut at the Frankfurt motor show in September, the four-wheel-drive F Sport gets a bodykit that includes a rear spoiler and 19-inch alloys with a dark metallic finish. The redesigned bumpers also have larger side grilles that give the car a more imposing stance.

The F Sport has Adaptive Variable Suspension (AVS) to make it more agile. There are two settings: Normal and Sport S+, which sharpens body control and steering.

The Lexus Dynamic Handling System is also on the GS F Sport, which further improves grip, response and agility.

Lexus has yet to announce prices for the GS 450h F Sport, but it will come to the UK next year. More information on specifications will be available closer to its launch.