More for you |
I want to reject my faulty Lexus ISFacelifted Lexus IS revealed at Paris motor showDeal of the day: Lexus IS HybridOur cars: Honda Civic Tourer, Ford Fiesta and Lexus ISOur cars: Skoda Octavia and Lexus IS
Home
News
Lexus IS 250C driven
news 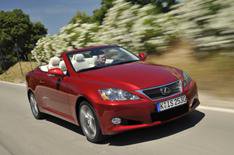 Can the Lexus IS 250C succeed where it's previous drop-top failed? We find out.

From the front, the resemblance to the saloon is unmistakable, which is no bad thing because the IS is a good-looking car. Unfortunately, the new rear-end is rather bulbous blame the folding metal roof.

It takes 21 seconds to raise or lower the roof, which is comparable with rival coup-cabriolets such as the BMW 3 Series Convertible. The fabric hood of the Audi A5 Cabriolet is significantly quicker, though, and it can be raised on the move, whereas you have to pull over first in the Lexus.

On the plus side, the IS's metal roof aids refinement when it's in place, and things stay civilised when it's stowed. Even when the car is fully open (roof and windows down) it's surprisingly draught-free for anyone in the front.

Back-seat passengers have to put up with far more buffeting, and rear kneeroom is quite tight when six-footers are sitting upfront. However, adults will be fine on short trips, and there's plenty of room for their luggage when the boot isn't filled with roof panels.

The only engine on offer is a 2.5-litre V6, but this produces a modest 205bhp and 186lb ft of pull. Extra stiffening in the car to make up for the loss of the fixed roof means it's dragging around 125kg more than it is in the saloon. Couple this with a standard automatic gearbox that's reluctant to kickdown and the IS 250C is no road runner.

Lexus has given it softer suspension settings than the saloon, and the ride seemed pretty supple on the French roads of our test route. You still notice some body flex over rougher stretches of Tarmac, though, and UK roads are likely to provide a sterner test.

There's plenty of grip and, despite the comfort-oriented set-up, its body doesn't lean excessively, but the steering is rather remote.

The IS will also get through a lot more fuel than rivals such as the BMW 325i Convertible. However, it's competitively priced, especially when you consider the amount of standard equipment even the entry-level IS 250C has more gadgets than Acme. SH

Our verdict
Refined and well equipped, but let down by engine and running costs