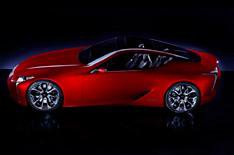 This is the Lexus LF-LC concept car, which will make its official debut at the Detroit motor show in January.

Lexus has already released teaser images of the front and interior of the car, but this is the first chance to see it in full.

Lexus calls the LF-LC a 2+2 sport coupe and says it combines high technology and organic shapes to connect the driver to the car. The interior has a sloping centre console, heavily styled driver's seat and a stitched leather dashboard.?

The LF-LC concept car has been designed by the Lexus design studio in Newport Beach, California, and shows the design direction Lexus will take.?

Lexus hasnt released any technical details, or confirmed whether a production version of the LF-LC is likely.