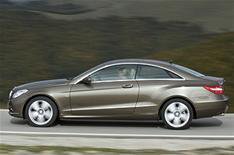 Mercedes-Benz has revealed that it will launch an E-Class Coupe with engine stop-start technology in mid-2010.

The E200 CGI will have a turbocharged 181bhp 1.8-litre petrol engine and will initially be available with only a manual gearbox.

Mercedes is aiming for CO2 emissions of around 159g/km, whereas the E250 CGI, which uses a 201bhp version of the same engine, produces 167g/km.

The new engine will also be introduced to other Mercedes models and an automatic version will follow at a later date. We understand that Mercedes engineers aren't satisfied that the system works smoothly enough to be mated with an auto gearbox at present.

However, Mercedes is confident that engine stop-start technology will be available on its V6 and V8 models, which have an automatic gearbox as standard, by mid-2011.

Mercedes is also working with McLaren to introduce a version of the Kinetic Energy Recovery Systems (KERS) that features in its current F1 cars.

We've been told that Mercedes is working on an electronic system, unlike some rivals who are developing mechanical versions. KERS uses energy created and stored under braking to help cut CO2 emissions and improve fuel consumption.