Pick-up trucks are going through something of a transition. While they were once the preserve of building sites and farmyards, many are now also being used as large SUVs by families. It should come as no surprise then, to find a premium manufacturer looking to muscle in. Enter stage right the Mercedes X-Class.

While a three-pointed star might seem odd on the front of a pickup, remember that Mercedes builds a huge range of trucks and vans, too. What’s more, it's no secret that, because pick-ups are classed as light commercial vehicles, they don't attract the same rate of tax as a normal car if driven as a company vehicle. Combined with ever improving levels of refinement, pickups are becoming more and more popular as company cars and even with private buyers.

That these vast imposing off-roaders attract less BIK tax than some family hatchbacks is bound to appeal to company car drivers who want something that will cope with harsh use at work but can shrug off family life the rest of the time. It’s certainly equipped to work hard, too; every X-Class gets four-wheel drive as standard, with power from a four-cylinder diesel with a choice of two power outputs or a powerful V6 diesel if you prefer. While some of the cheaper models get a manual gearbox, most get a seven-speed auto as standard..

However, just because it has a posh badge, don’t think the X Class has it easy. Volkswagen has its Amarok, while there's a host of other pick-ups ready to steal sales, including the Ford Ranger, Toyota Hilux and Nissan Navara (upon which the X-Class is based).

Read on for our full review and to find out whether the X-Class makes more sense than traditional large SUVs and the rest of its pick-up rivals. And you’re tempted enough to buy one, our New Car Buying pages should be your first stop. 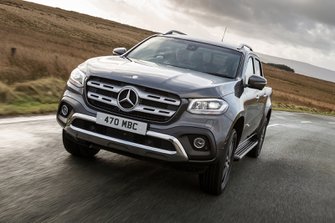