Pick-up trucks have become increasingly popular in recent years, thanks in part to some seriously tempting benefit-in-kind rates for company car drivers. Although the Volkswagen Amarok was relatively late to the party, it has become a popular choice. The Volkswagen badge obviously helps, but so do the Amarok's reasonable driving dynamics, strong engines and impressive load-lugging credentials.

Unlike some rivals that offer a variety of bodystyles, the Amarok is only available as a four-door with five seats. You're also limited to a sizeable 3.0-litre V6 diesel in two different power outputs, both versions of which come equipped with an eight-speed automatic gearbox and permanent four-wheel drive.

On the road, pick-ups can’t match conventional SUVs for driving pleasure or ride comfort. But how does the Amarok compare with rival pick-ups such as the Mercedes-Benz X-Class, Ford Ranger and Mitsubishi L200? Read on over the next few pages for our full verdict. And while we might not be able to save you any cash on a pickup, our New Car Buying pages has plenty of deals on SUVs and regular cars, too. 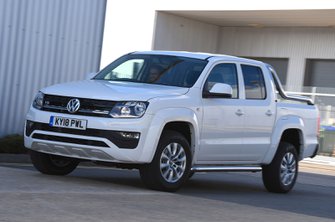