There was a time when you’d only ever see a Toyota Hilux on a building site or farmyard. They may have been very capable off-road and blessed with legendary reliability, but on the road they were slow, unrefined and uncomfortable. That said, the rest of its pick-up rivals couldn’t claim to be any better on the black stuff.

Skip forward to the present day and pick-ups have become an increasingly popular alternative to large SUVs. While improvements to how they drive have helped, we suspect the tax savings available to company car users are more of an incentive. You see, any pick-up with a payload of 1000kg or more is classed as Light Commercial Vehicles, which in finance terms means a fixed road tax and benefit-in-kind price based on age, regardless of how big it is, how thirsty the engine is or how much it costs.

Like most rivals, the Hilux is available as a two-seat single cab, an extra cab with a couple of occasional rear seats and finally as a double cab. With four doors and usable rear seats, it’s no surprise that the double cab is the most popular option. As for engines, there’s a single 2.4-litre diesel with 148bhp, available with both a manual or five-speed automatic gearbox.

But how does the Hilux compare with its equally rugged pick-up rivals, including the Ford Ranger, Nissan Navara, Mitsubishi L200 and our 2019 What Car? Pick-up Of The Year winner, the Volkswagen Amarok. Read on over the next few pages to see how the Hilux drives, what it’s like inside and what it’ll cost you.

And if you decide the pick-up life is the way forward, head to our New Car Buying pages to see how much you could save on your new car purchase. 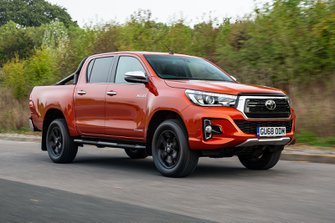