More for you |
The best 21-plate large SUV offersCitroën Berlingo long-term test reviewE10 petrol - what is it and how could it affect you? Hello to 21-plate day: The best cars you can buyNew Volkswagen ID.3 and Citroën e-C4 vs Kia e-Niro
Home
News
Mercedes reveals new hybrid concept car
news 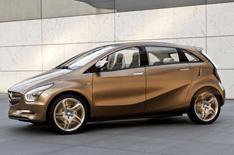 Mercedes-Benz will display its new hybrid concept car, the BlueZero E-cell Plus, at the Frankfurt motor show later this month.

Unlike the BlueZero E-cell all-electric concept car that Mercedes revealed at the Detroit motor show earlier this year, the 'Plus' version has a 67bhp 1.0-litre petrol engine that acts as a range extender.

The petrol engine is located near the rear axle and can extend the vehicle's range by charging the battery while the car is driven.

Emissions of just 32g/km are achieved when the car operates in petrol-electric mode.

A range of 62 miles is achievable using just the 134bhp electric motor, but that can be extended to around 370 miles when combined with the petrol engine.

Recharging the car's lithium ion battery pack takes a little over an hour.