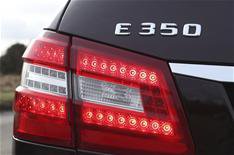 Tentative talks have begun within Mercedes to change the way it names its cars, What Car? has learned.

Preliminary discussions have begun on making the numerical designations attached to the cars names more relevant again. They used to refer to the engine size, but in recent times have diverged from this, to the point they have no specific relation to the car.

'It's confusing for customers, and I'd like to see it changed,' said a company insider. 'Whether it will happen is too early to say, but the discussions have begun.'

The future of the Smart scooter concept being unveiled at the Paris motor show hangs in the balance, as falling two-wheel sales threaten to disrupt plans to bring the vehicle to market.

The traditional-looking scooter uses a lithium-ion battery and has a range of around 60 miles. It is also fitted with an airbag.

However, while the plan has widespread backing within Smart and parent company Daimler, as it is seen as a potential way of bringing new customers to the brand, and boosting its image, falling scooter sales in Europe could hinder plans.

"In the UK the scooter market has fallen dramatically in the past years,' said a company source. 'However much we like the idea of the product, it must have a realistic chance of sales success before we commit to it.'