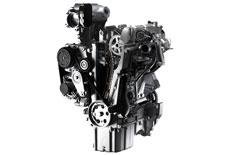 A new 104bhp version of Fiats Twinair engine will make its debut in the Panda-based 500L early next year.

Fiat has been developing this more powerful version of its two-cylinder engine for some time, but until now there had been no word on when it would appear in production models.

Even more-powerful versions of the Twinair engine will follow. Vittorio Doria, Fiat's chief engineer of gasoline engines, told What Car? that 120bhp is easily possible with a few modifications. This would make the Twinair a candidate for larger cars, such as the next Fiat Bravo, and sportier models, including a Panda Abarth.

Doria also admitted that Fiat is aware some Twinair owners are disappointed with their fuel economy. He said the company is working on ways to make it easier for drivers to achieve the impressive MPG figures in real-world driving.