Audi and BMW are old hands at making classy four-seat convertibles that are refined enough to use all year round. Let’s see if BMW’s latest 4 Series drop-top can upstage its toughest rival...

Our reigning Coupé of the Year provides the basis for this striking new four-seat soft-top.

The current benchmark recently received a subtle facelift and a heavily updated interior.

When Mercedes launched its original SLK roadster in 1996, it revolutionised the convertible. Suddenly, everybody wanted an SLK-style folding hard-top; the traditional fabric roof was destined for the dustbin of history. Or, at least, that’s the way it seemed at the time.

In reality, folding hard-tops have turned out to be no more than a passing fad – the motoring equivalent of calculator watches, bum bags and Pokemon Go. 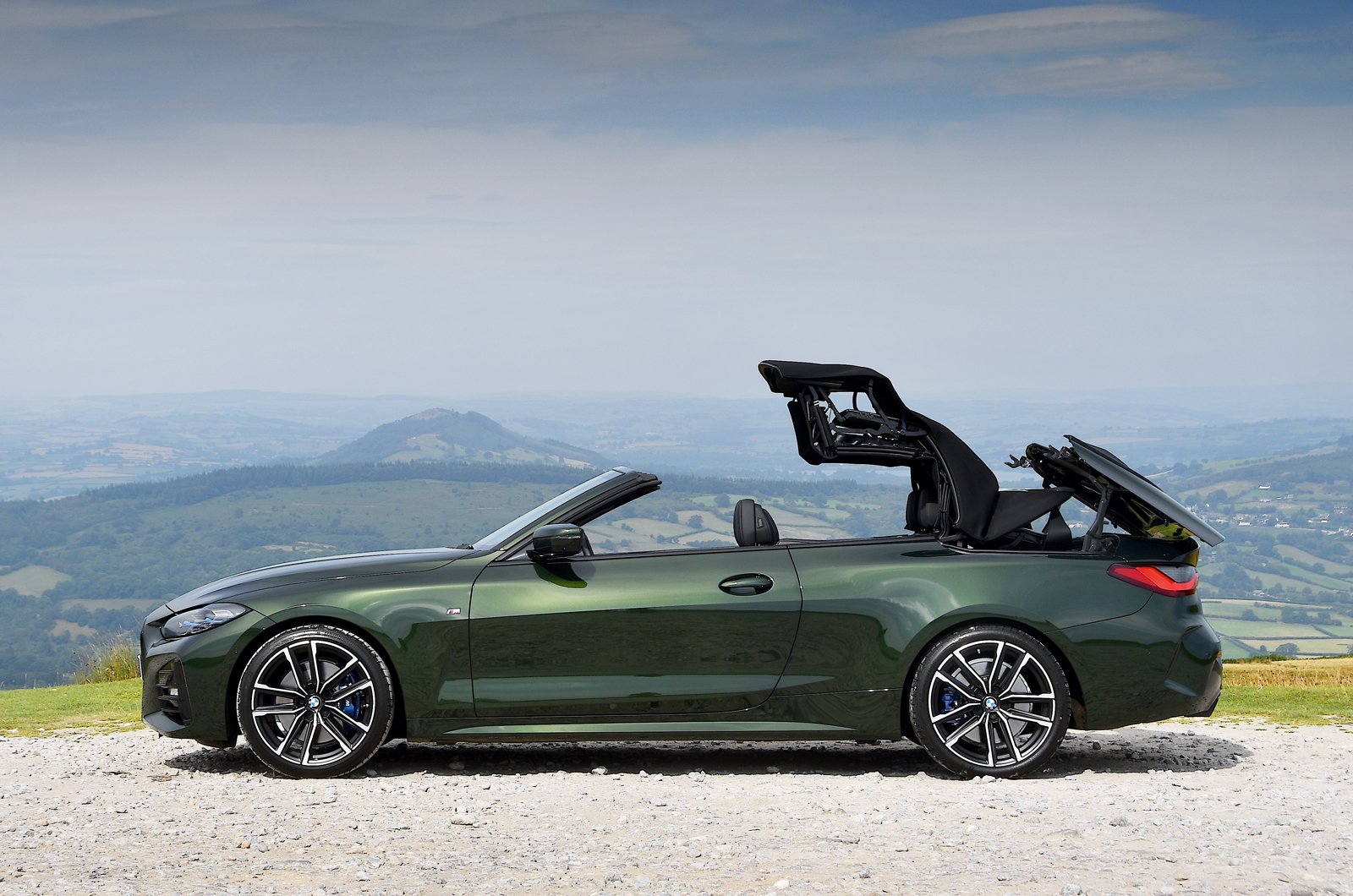 The trouble was that all those moving metal panels and their motors tended to leave you with a car that weighed more than the moon, hurting fuel economy, emissions and handling. And then, of course, there was the simple fact that you could fit your luggage or the roof in the boot, but not both at the same time.

BMW is just the latest manufacturer to return to a soft-top, with its new BMW 4 Series Convertible. And that’s not the only reason to be excited about it; this new car also happens to be based on our reigning Coupé of the Year and claimed the title of Convertible of the Year. Here, we’re testing the 420i petrol version that’s expected to be the best seller.

Competition comes from one of the few brands that never jumped on the folding hard-top bandwagon: Audi. Its Audi A5 Cabriolet was recently refreshed, and we’ve got the 40 TFSI Vorsprung variant, which is equipped with almost every luxury you can think of. 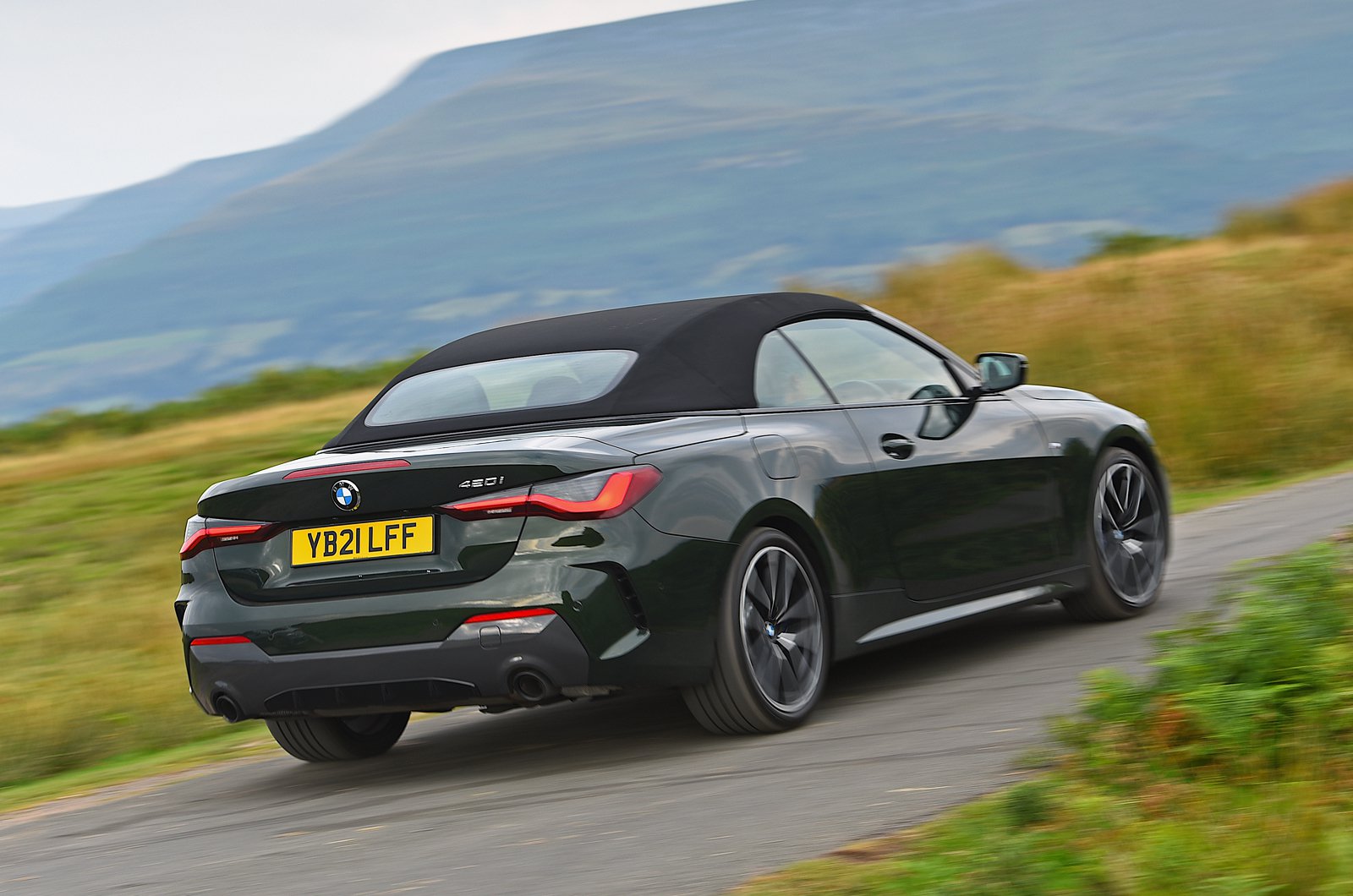 Both of these convertibles use turbocharged 2.0-litre petrol engines, but the one in the A5 produces more power and torque and is under the bonnet of a lighter car.

Given all of these advantages, you might be surprised to learn that the A5 is just 0.3sec quicker than the 4 Series from 0-60mph. However, that’s simply because the former won’t rev when you’re stationary; put your foot down on the move – for example, to overtake a slow-moving vehicle on a back road or join a fast-flowing motorway – and the difference is more marked. 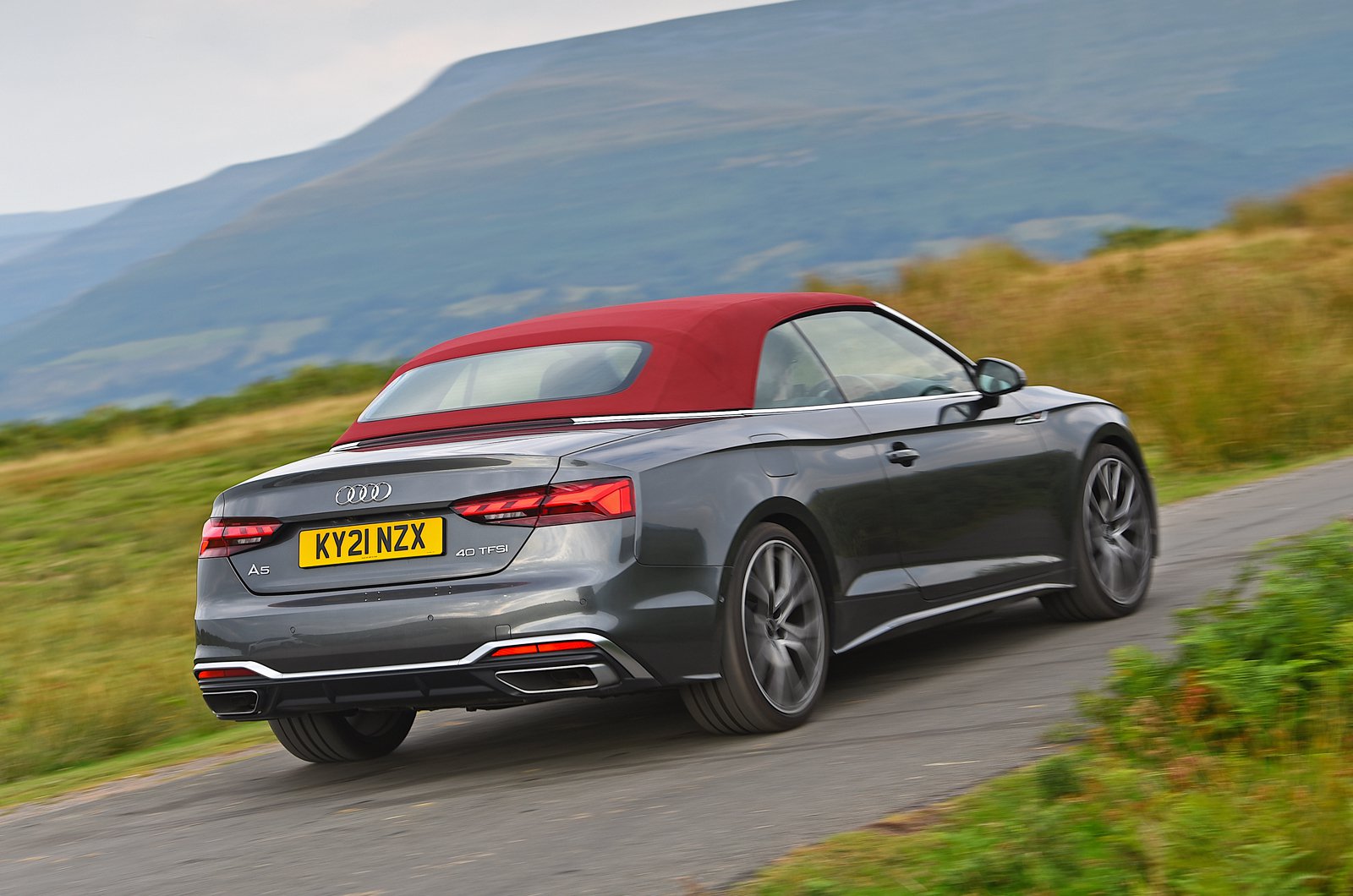 The two engines also sound quite different, although here the answer to the question of which is better depends on your personal taste; the 4 Series emits a sporty rasp when you rev it, while the A5 driver gets to enjoy some satisfying turbo whoosh.

There’s not a lot wrong with their automatic gearboxes, either, with both shifting smoothly most of the time and changing down swiftly enough if you put your foot down hard. That said, the A5’s is the slower of the two and it can be a bit jerky when parking.

Stepping up from an entry-level M Sport-spec 4 Series to the M Sport Pro Edition that we’ve got here brings adaptive suspension, which can be softened or stiffened to suit the prevailing road conditions, while Vorsprung versions of the A5 also feature this sort of adaptive set-up. 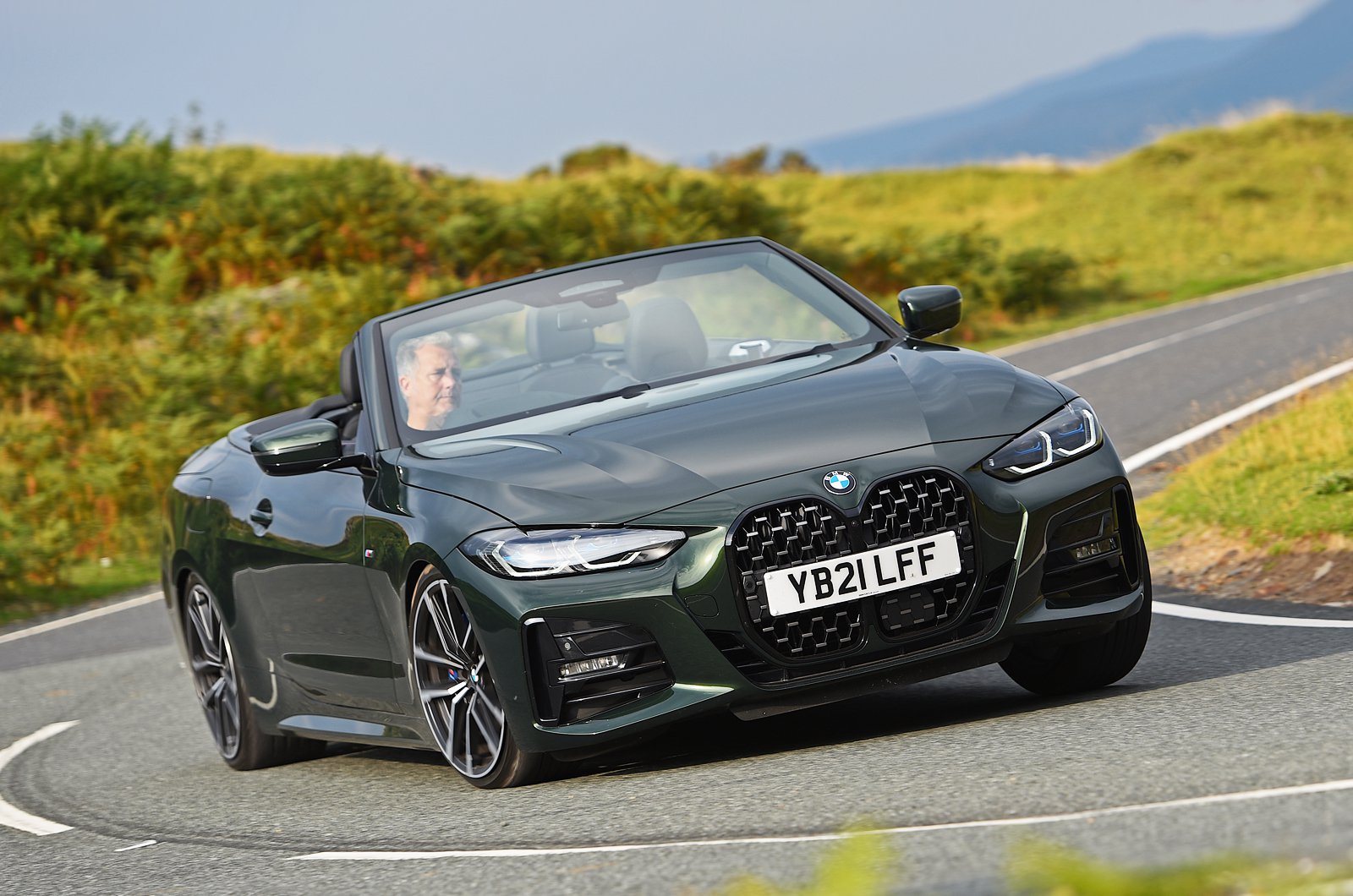 Unfortunately, selecting the firmest setting in the A5 highlights the rigidity that has been lost compared with the coupé version; bumps send unpleasant shudders through the car’s structure and cause the steering wheel to writhe about in your hands.

As a result, it can be difficult to place the A5 accurately on the road. And even when you switch the suspension to Comfort mode, any attempt to build speed quickly leaves you feeling like the car has a mind of its own, because the wheel is tugged this way and that.

Things are much more composed in the 4 Series, which not only feels more solid over bumps but also benefits from steering that’s quicker to respond and terrifically precise, allowing you to place the nose of the car exactly where you want it. 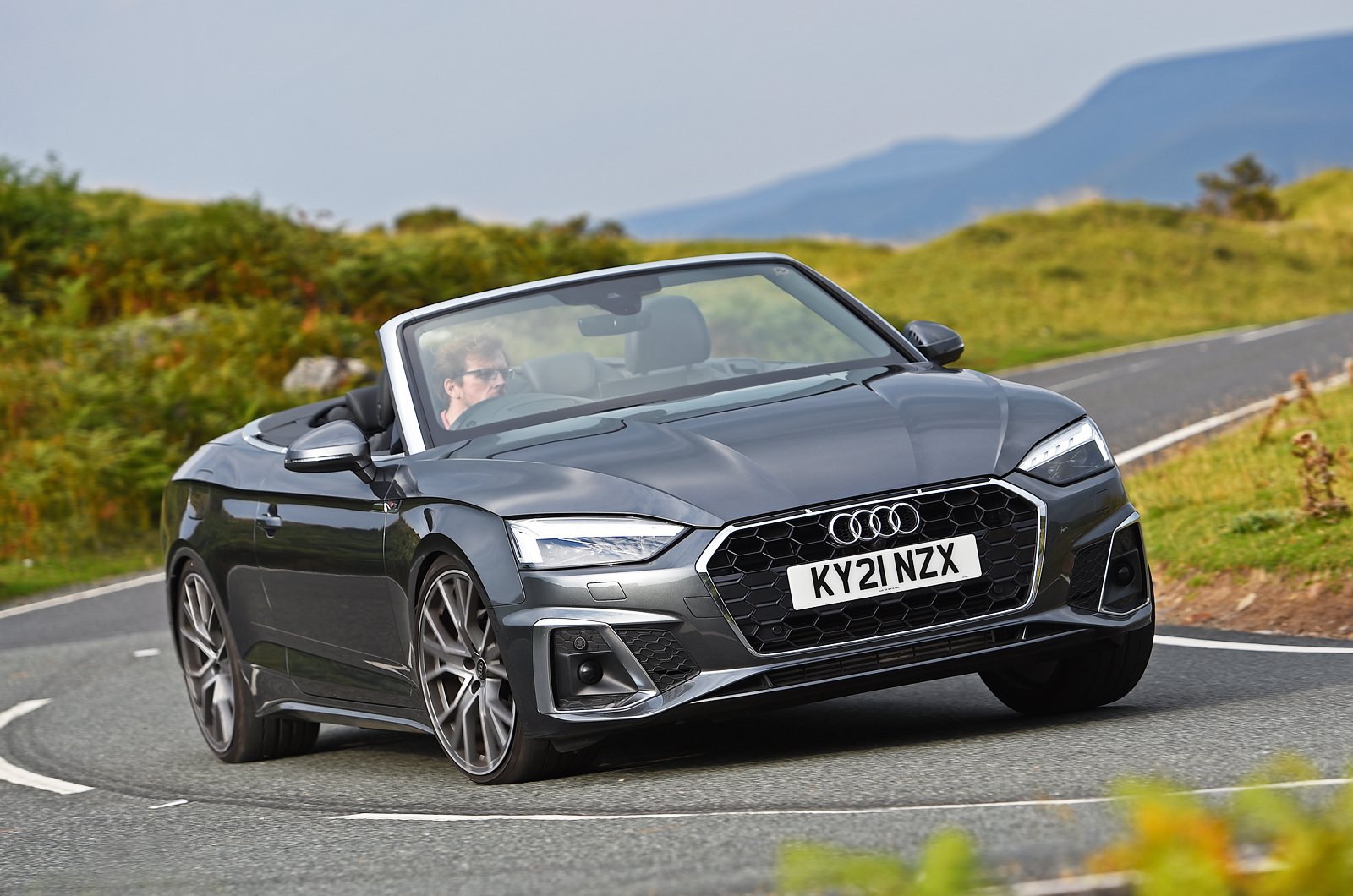 Despite this ability in the twisties, the 4 Series can also play the comfortable cruiser. With its suspension slackened off, it rounds off all but the nastiest potholes and strikes a fine balance between comfort and control over undulating Tarmac.

The A5 also impresses when you slow things down, delivering a supple ride without feeling overly floaty, even if expansion joints can still catch it out (the standard 20in wheels don’t help).

With their roofs up, both cars do a good job of shutting out unwanted noise, although at higher speeds you do hear a bit of wind whistle from around the door mirrors of the 4 Series and across the windscreen in the A5.

Going alfresco takes around 17 seconds in each, and their roofs can be operated at speeds of up to 31mph. As a bonus, the 4 Series lets you fold its roof down remotely via a button on the keyfob before you get in the car. 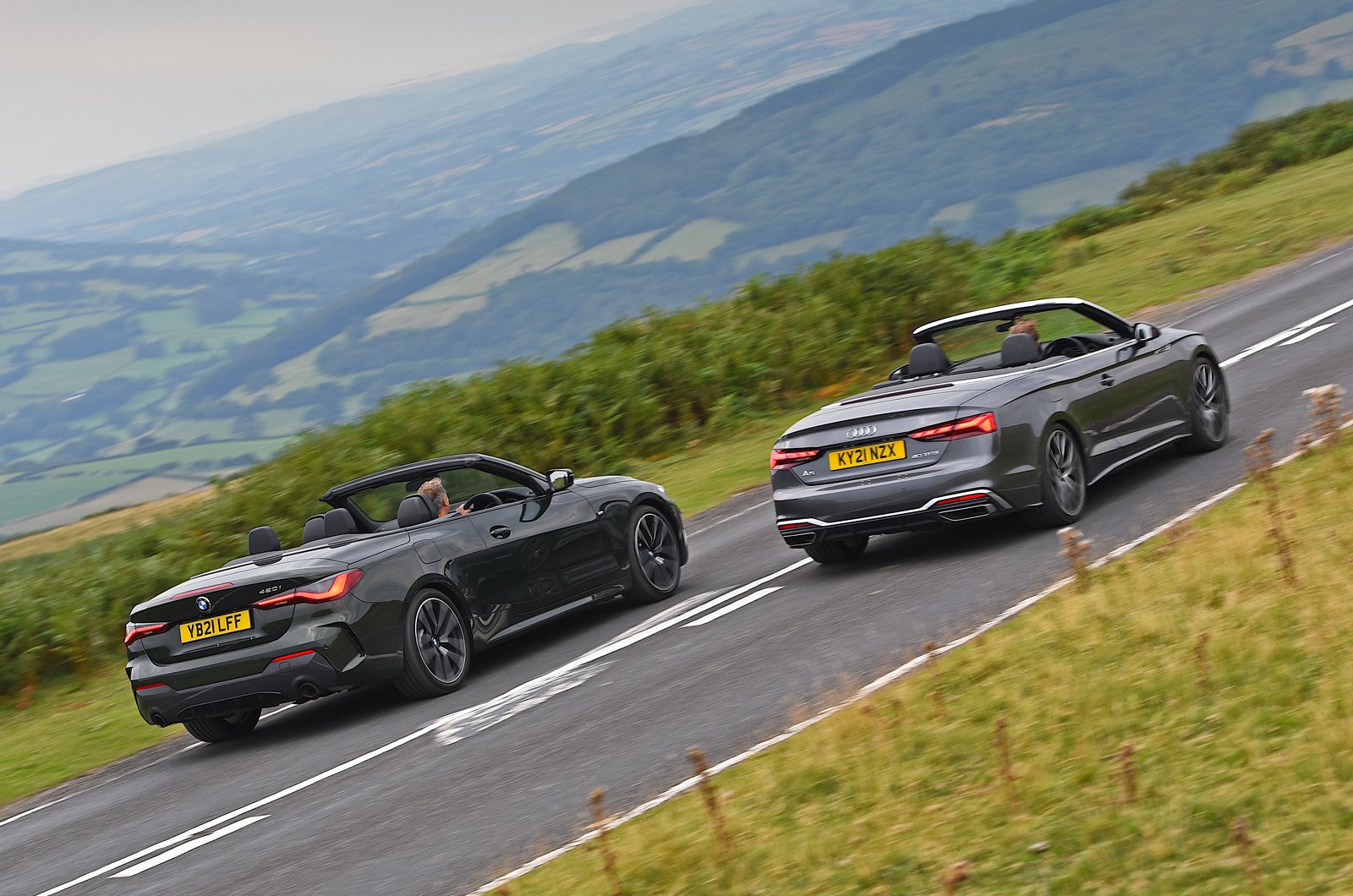 Sit in the front with the windows up and you won’t arrive at your destination in either car looking like your hair has had a close encounter with a hurricane, although you do feel more wind whipping around your body in the 4 Series than the A5.

To compensate, BMW offers something called a Warm Air Collar for £500 – basically, vents in the front seats that blow warm air onto your neck. And for around £350, both cars can be specified with removable wind deflectors, which make them even more refined inside.

The downside of these deflectors is that they go over the top of the rear seats, in effect leaving you with a two-seater. But then few people will want to ride in the back seats of either car with the roof down anyway, given the amount of buffeting you experience there.