Households on tight budgets don’t need to compromise to get a great family SUV, as these entry-level models demonstrate. Let’s see which one offers the best value...

Recently facelifted, the Karoq is the car the others have to beat, having set the benchmark at this price point since 2017

The Grandland has been around for a few years now, but a tweaked interior and new trims promise to give it a new lease of life

The latest Sportage has previously shone in pricier guises, but can it compete at the cheaper end of the class?

Ding, ding, ding: round three. Earlier this year the fifth-generation Kia Sportage, in hybrid guise, stepped into the family SUV ring and gave both the closely related Hyundai Tucson and the Ford Kuga a bloody nose. It was a convincing victory for the young upstart, followed up just a couple of months later with a win against the recently facelifted Mazda CX-5 – the Sportage proving that it was just as formidable in regular petrol form.

Now, though, we want to see if the Sportage can succeed at the budget end of the family SUV class, so we’re putting a petrol model in entry-level 2 trim up against two recently refreshed stalwarts: the Skoda Karoq and Vauxhall Grandland. 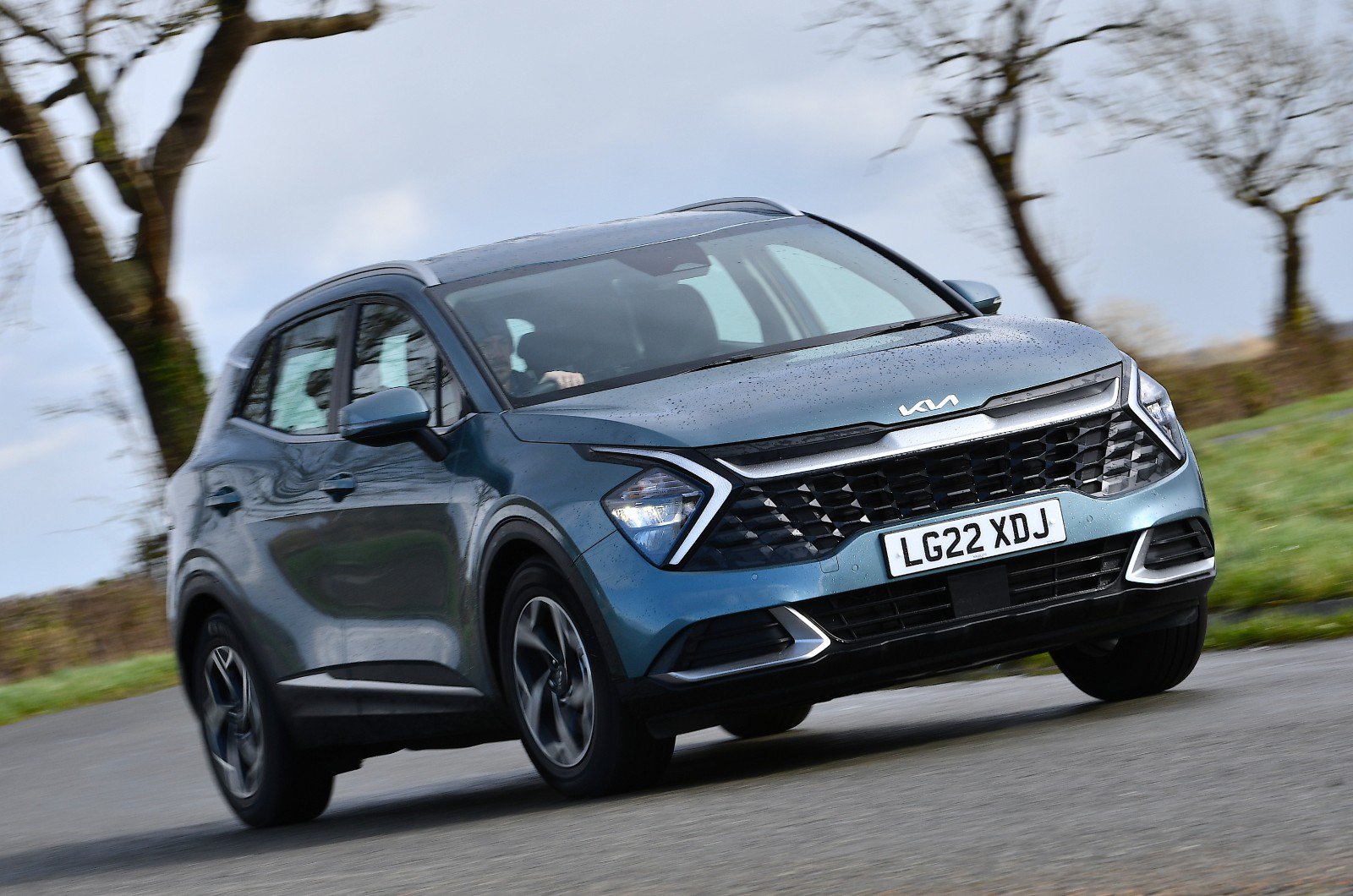 The Karoq has impressed us with its comfort, practicality and competitive pricing ever since it was launched back in 2017. Now, though, it benefits from new LED headlights, a revised trim structure and a tweaked range of cleaner, more economical engines. To help keep the price down, we’re testing it in entry-level SE Drive trim with the cheapest engine: a 1.0-litre three-cylinder petrol.

The Grandland, meanwhile, has long benefited from a low list price and a decent equipment list, but so-so interior quality and average driving dynamics have always let it down. However, it’s been treated to a major update, with the exterior being completely reworked around Vauxhall’s new ‘Vizor’ front grille and the trim line-up simplified. Oh, and you might have already noticed that Vauxhall has dropped the ‘X’ from the end of the Grandland’s title.

‘There’s no replacement for displacement’ is an Americanism often used to justify the massive engines fitted to muscle cars, but the Sportage proves the phrase can have universal application. Benefiting from a relatively large 1.6-litre engine under its bonnet (versus the diminutive 1.0 in the Karoq and a 1.2 in the Grandland), the Sportage is in a different league when it comes to power and performance, taking 8.5sec to reach 60mph from rest, compared with 9.9sec for the Grandland and 10.4sec for the Karoq. 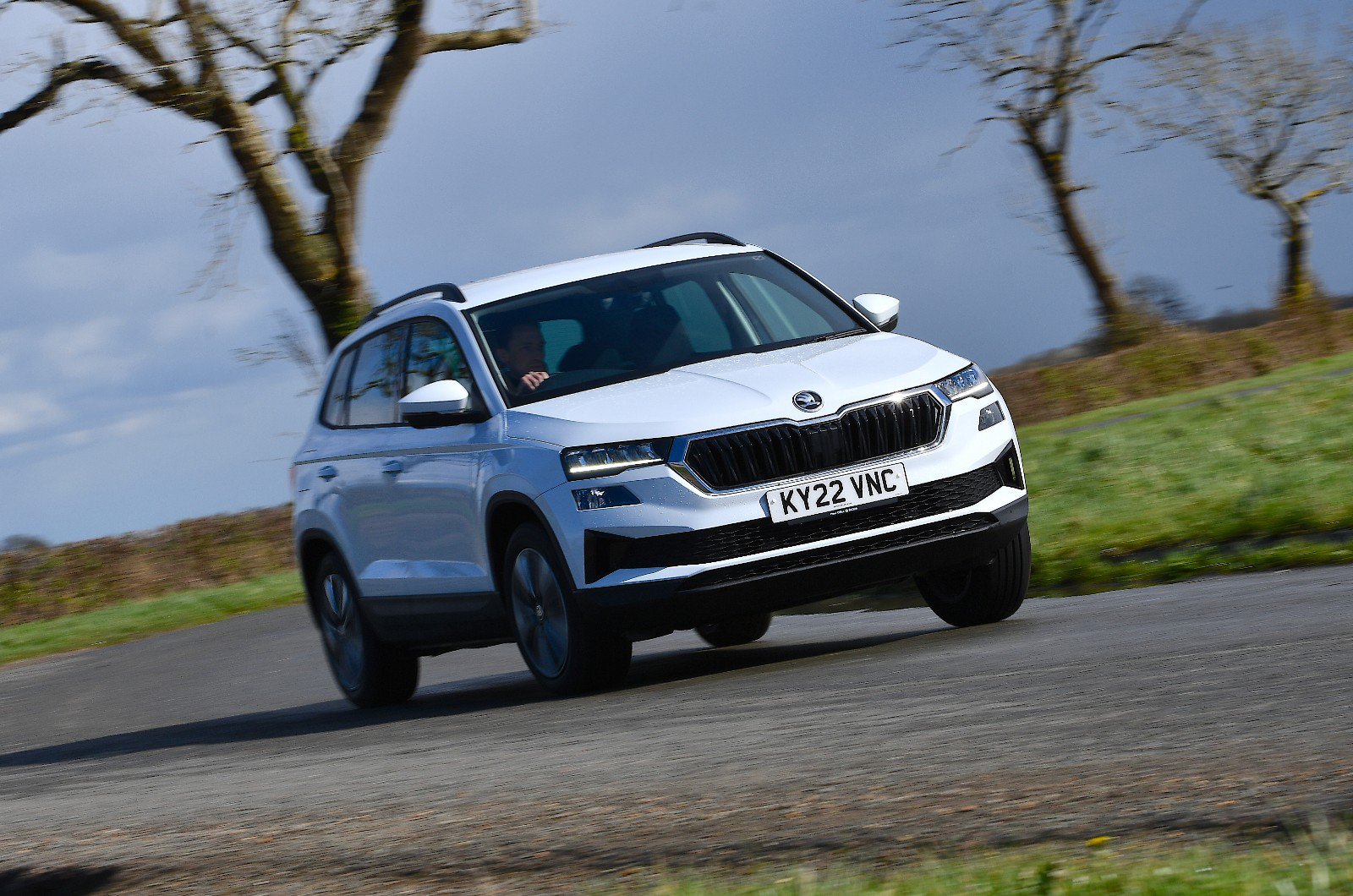 The Sportage’s extra grunt also pays off in everyday, give-and-take driving situations, allowing you to leave it in a higher gear and still find that it responds quicker and pulls with greater alacrity when you put your foot down. Provided it’s in the correct gear, the Karoq responds reasonably willingly to prods of the accelerator, whereas the Grandland is initially rather lethargic. Meanwhile, accelerate up through the gears from 30-70mph – as you might when joining a motorway – and the Sportage is a healthy 1.6sec quicker than the Grandland and a full 2.0sec ahead of the Karoq.

Swapping cogs is fairly intuitive in the Sportage and Karoq. Although the former’s clutch is a bit springy, you soon get used to this, and its gearshift is light and accurate. The Karoq’s is slicker still, with a short shift action and smooth clutch take-up.

The Grandland is a different story; its clutch engages fairly abruptly and its gearlever action is long and notchy. Factor in the grabbiest (albeit most powerful) brakes of our trio and the Grandland forces you to make a conscious effort to keep things smooth – otherwise you’ll find your passengers doing passable impressions of a nodding dog. 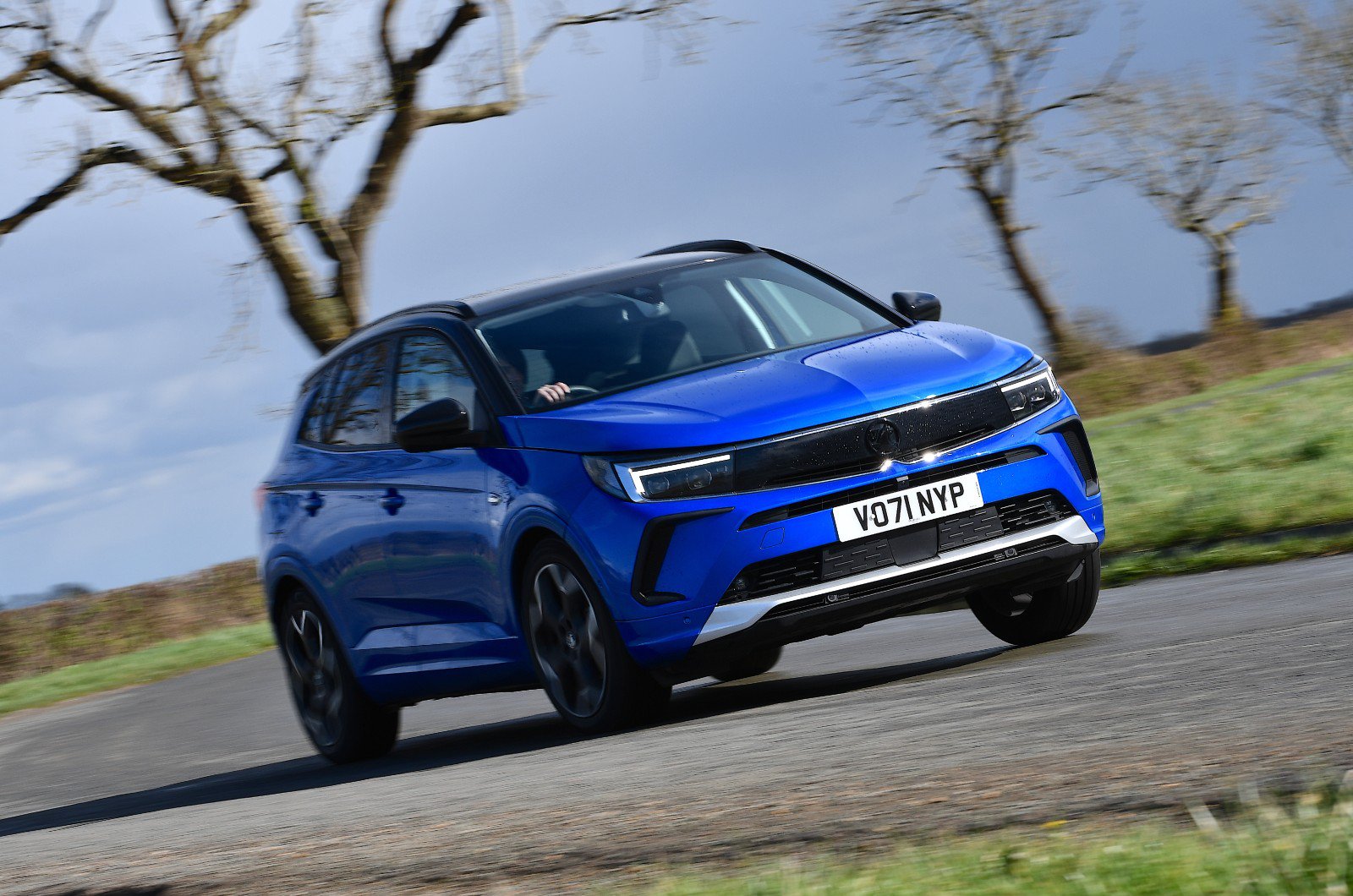 This isn’t helped by the Grandland’s ride. It’s the least settled at all speeds, gently tossing your head from side to side even on roads that appear relatively smooth, and its suspension struggles to deal with mid-corner bumps. Mind you, it never becomes too jarring, even over potholes, and the massive, 19in wheels fitted to our test car probably won’t have helped (17in wheels are standard, matching the Sportage and Karoq).

Both the Sportage and Karoq do a much better job of smoothing out rough sections of road and feel settled at higher speeds. However, the Sportage has the edge around town; its suspension does a better job of rounding off expansion joints and road scars, despite being fractionally firmer. It’s more comfortable than any rival at this price point.

The Sportage also strikes the best balance between comfort and agility, because while it leans more than the Karoq in corners, it grips a little more evenly front to rear, giving you the confidence to push harder on winding roads. It also benefits from heavier, more naturally weighted steering. In some more expensive versions of the Karoq, you can add some weight to the steering using the Drive Mode settings, but not on this entry-level version. 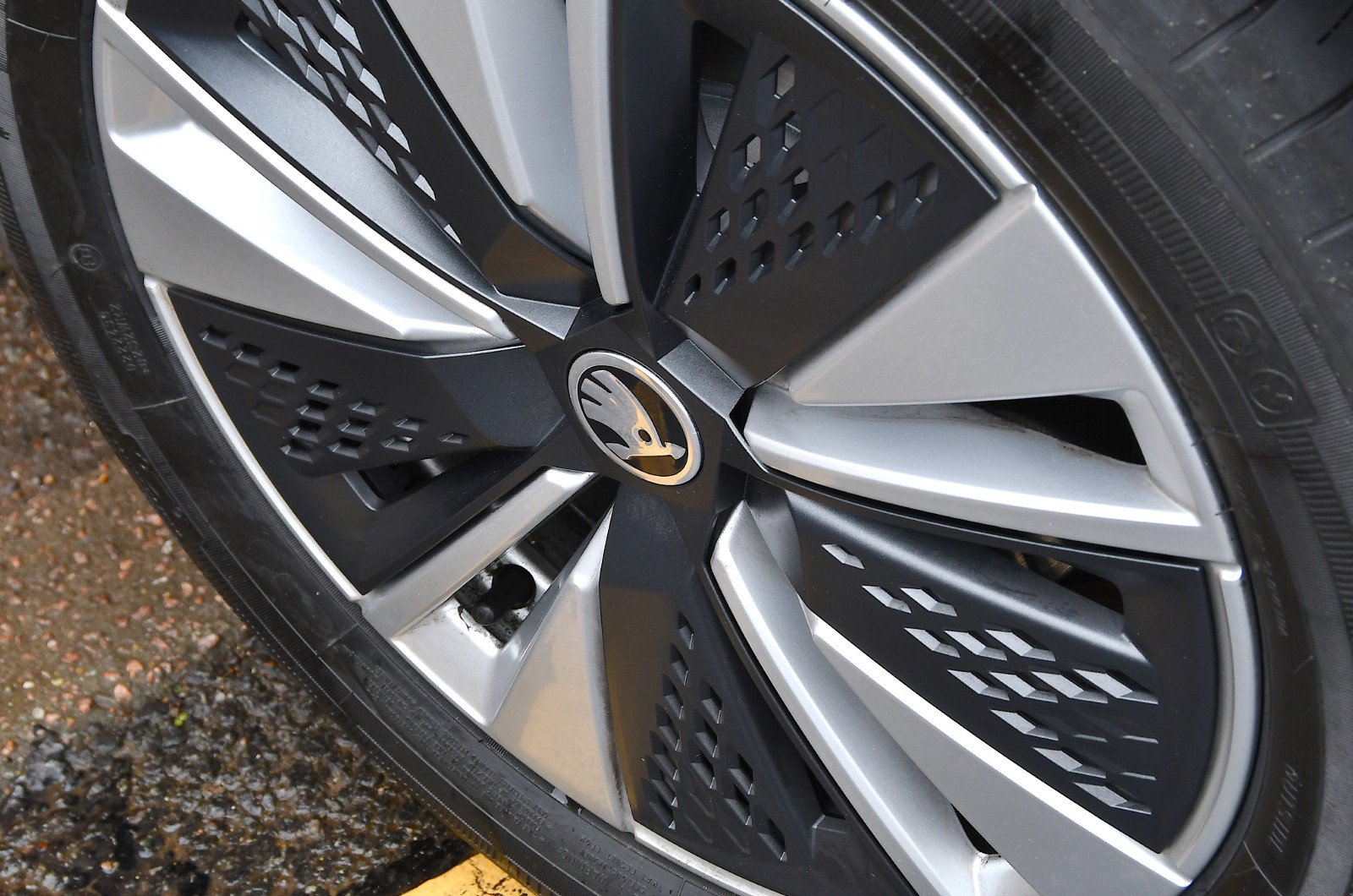 The Grandland, meanwhile, is some way behind its rivals. While it grips well enough and stays relatively upright through bends, vague steering means positioning it accurately can be tricky at higher speeds.

The Grandland isn’t the most relaxing of cars to drive, then, but at least it’s relatively hushed at a cruise. Despite kicking up more tyre noise than its rivals due to its larger wheels, the Grandland was the quietest at motorway speeds, with wind noise being especially muted. The Sportage and Karoq suffer from more wind buffeting around their door mirrors, and the latter’s suspension clonks loudly over large abrasions, most noticeably at town speeds.

How to spec a Skoda Karoq