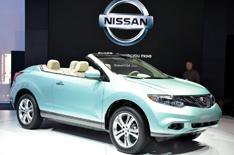 Nissan unveiled the most frivolous car of the Los Angeles motor show in the Murano cross cabriolet.

It is a four-seater crossover with a folding canvas hood that might just have a market in California but seems totally ill-suited to British weather and tastes. Perhaps fortunately, there are no plans to sell it outside America, but that was once true of the hard-top semi-SUV that went on to be exported.

It appeared on the stand alongside a concept for an all-new kind of sedan (saloon) called Ellure which wont be made as it stands, but might form the basis of a family four-door of the future. Nissan abandoned the family saloon market when the Primera was withdrawn from sale.

Nissan chief creative officer Shiro Nakamura says Ellure represents a switch from rational to emotional saloons and is the kind of car that might attract buyers who have been switching to crossovers in recent years.

It has what Nakamura describes as a simple but passionate interior inspired by Japanese culture, with fluid movement of shapes and control of light and dark, lounge lighting and four seats.
It is said to be powered by a four-cylinder hybrid powertrain driving the front wheels.

As proof that the crossover market is far from satisfied, however, there is the Murano cross cabriolet, which will go on sale in the US from $46,400. The show car is in mint green, which seems to emphasise the height of the bodywork behind the rear seats, and has a sand-coloured hood with an unfortunate hump just before it falls away to the reduced boot space compared with the all-metal Murano.

Nissan says it is a first of a kind. Lets hope its the last. It looks truly ghastly.