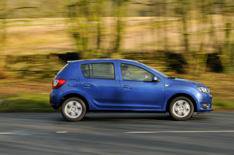 Dacia has made a sizeable impact with the Sandero and Duster since it launched them in the UK at the end of last year. The Renault-owned budget brand has headline-grabbing prices, a no-haggle buying process and bullish comparisons with mainstream rivals.

Dacia's Qashqai-sized SUV, the Duster, starts at just 8995, and the Fiesta-rivalling Sandero costs from an incredulous 5995. All this is impressive enough for us to overlook a modest predicted Euro NCAP safety score of three stars and make the Sandero our cheap supermini of choice in the 2013 What Car? Car of the Year Awards.

If you're totally sold on the Sandero's headline purchase price then our vehicle will seem like a disgusting, capitalist extravagance, because the entry-level car is basic in the extreme; you don't even get a lightbulb in the boot.

Still, if Dacia's recent history is to be believed, that model won't be the most popular choice. In fact, the company's dealers in continental Europe have tended to sell mid- to high-spec editions and the early orders in the UK would appear to follow that trend. The average price of a UK-bought Duster, for example, is not 8995, but just more than 13k.

So, we've gone for Laureate trim, which brings electric windows all round, electric side mirrors, Bluetooth, air-conditioning, a seven-inch touch-screen infotainment system and cruise control. Heck, it's even got remote central locking.

We've also ignored the old-school 1.2-litre four-cylinder engine, (your only option if you go for an entry-level 'United Nations white' model) but Renault's latest 0.9-litre turbocharged three-cylinder petrol motor. This engine produces 90bhp and 99lb ft of torque, enough for a 0-62mph time of just over 11 seconds and reasonably comfortable motorway cruising. We reckon it might be a bit more refined than the four-pot, too.

The early press images of the Sandero featured a natty metallic blue paint finish, so we added that at a cost of 470. We also elected to upgrade the stereo to include rear speakers, because this also 'activates' the satellite-navigation option within the infotainment system. It costs 250, which is a decent price for a manufacturer-fit set-up.

We held fire on the alloy wheels, though. For starters, they'd be nothing but a scuff hazard in the suburban streets where the Sandero is likely to spend a lot of its time. Perhaps more importantly, they'd have taken the overall price through the 10,000 mark and that was a value barrier we just weren't prepared to break.

The end result is a fully loaded five-door supermini that would cost you 9515. By comparison, an 80bhp five-door Fiesta with a decent slug of kit would be around 14k. It's worth remembering that your Ford dealer would slash a bit off that figure, whereas the Sandero's price is non-negotiable and you'd also be buying a better-driving machine with a far more accomplished interior.

The Sandero's cabin and fascia are comfortable enough, but while the dashboard layout is uncluttered and easy to use, you could just as easily call it bare. You're unlikely to want to get touchy-feely with any of the interior plastics, either.

Still, we have 12 months ahead of us to find out if build quality is up to scratch, and see how the interior finish (such as it is) lives up to the scuffs and thumps of everyday life. This is a year that will aim to find out how many compromises the Sandero asks you to make in return for that astonishing price.

If it does cope with everyday life without too many worries, then this could be one of the most revelatory stories from our fleet in 2013.