Outlander PHEV to take 50% of sales

* Priced from 30,000 * Sales to rise over next couple of years * PHEV's three-year costs equal to those of a diesel model... 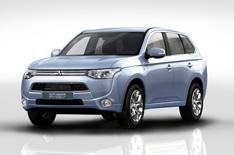 The Mitsubishi Outlander PHEV plug-in hybrid could account for 50% of Outlander sales in the UK, according to Mitsubishi's managing director, Lance Bradley.

Bradley also claims that despite indications the PHEV will top the Outlander's price list, its three-year costs will be around the same as those offered by a diesel model.

He said: 'When you take the purchase price and the running costs into account, it is about the same amount over a three-year period for the diesel as it is for the PHEV.'

Bradley also believes the hybrid will become more affordable over time, hinting that it will eventually be sold in lower, cheaper trims.

Speculating on PHEV sales figures, Bradley told What Car?: 'I think that in time it could be as high as 50% [of Outlander sales].'

The Outlander PHEV uses a 117bhp 2.0-litre petrol engine, two 60KW electric motors and a 70KW generator. It emits 44g/km of CO2, with average economy of 149mpg. It can travel 32 miles on electric power alone, while the combined petrol-electric range is 557 miles.

The PHEV Outlander is expected to cost around 30,000 (after the 5000 Government low-carbon grant), with sales starting in the summer.