More for you |
I want to reject my faulty Lexus ISFacelifted Lexus IS revealed at Paris motor showDeal of the day: Lexus IS HybridOur cars: Honda Civic Tourer, Ford Fiesta and Lexus ISOur cars: Skoda Octavia and Lexus IS
Home
News
Paris debut for Lexus IS drop-top
news

Paris debut for Lexus IS drop-top 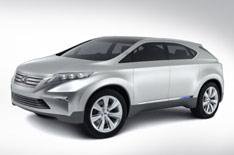 Lexus will unveil an IS convertible at the Paris motor show next month.

Called the IS 250 C, it will be Lexus's second derivative of the IS, following the saloon and the IS-F performance car thatwent on sale in the UK earlier this year.

Lexus is keeping tight-lipped about the car until the show, but it is powered by a 2.5-litre petrol engine and is rumoured to have a hard-top roof. Expect the IS 250 C to be on sale in the UK next summer.

Also on the Lexus stand in Paris will be the LF-Xh concept car, making its European show debut after being unveiled at the Tokyo motor show last year.

The 4x4 hybrid is rumoured to be a foretaste of the car that will eventually replace the RX. A V6 petrol engine combined with electric motors powers the concept car.