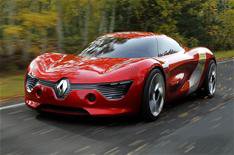 The stunning Renault DeZir electric sports car is the first of a series of six concept cars Renault will be revealing over the next two years.

The main point of this car is to show where Renault will take its design in the future. 'Simple', 'sensuous' and 'warm' are the key attributes to the car's design, says the company.

The vertically-mounted 24kWh lithium-ion battery is located behind the bench seat and provides the car with a range of around 100 miles.

The basic motor is the same as the unit used for Renault's production electric cars, although power has been uprated to 110kW.

See the shape of things to come...
Unlike many concept cars, which are no more than wooden models, the DeZir is a real car that can actually be driven, as What Car?'s Matt Sanger found out.

See the stunning DeZir that hints at the family face of Renault's next-generation cars - starting with the Clio in 2012.