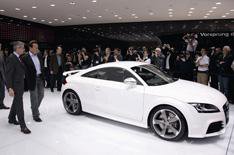 Governor of California and Hollywood actor Arnold Schwarzenegger was a surprise visitor to the Geneva motor show this week.

The Terminator star was shown round the Volkswagen group's stands including VW, Audi and Bentley where he sat in the new Bentley Continental Superspeed.

Schwarzenegger is a keen promoter of green technologies and the Superspeed, despite being the fastest-ever Bentley, can be run on biofuels.

It's not clear what Arnie thought of the stands, and reports of him turning to the show's organisers and claiming 'I'll be back' are unfounded.