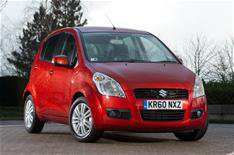 Suzuki has added a more powerful, but more efficient, 1.2-litre petrol engine to its Splash range.

First used in the Swift supermini, the 93bhp 1.2-litre is 8bhp more powerful than the previous 1.2-litre, but also more economical and efficient.

Fuel consumption improves by 4mpg to an average of 55.4mpg, while a drop in CO2 from 128g/km to 119g/km means the car is free from road tax in the first year and costs just 30 a year thereafter.

The Splash leans through corners, but it turns in well and has plenty of traction. The ride is good, particularly on faster non-urban roads.

The 1.0-litre engine is also set to be overhauled later in the year. Emissions will come down to 109g/km and the car will qualify for a 100% write-down against tax in the first year as a company car.