* Council may stop paying for cameras * Says it doesn't get money from fines * Thinks there are better ways to spend money... 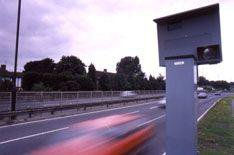 Swindon Borough Council could stop paying for speed cameras because it says they might not be the best way to make roads safer.

Fines from the cameras, which cost the council about 400,000 a year to run, goes to central government, and the council believes there could be better ways to cut accidents.

The leader of the Tory-run council, Roderick Bluh, said: 'All of the fines that are collected go back through national government, so we don't get to reinvest them.

'Having done a lot of research, we believe that speed cameras might not be the most effective way to reduce accidents.'

Swindon council's head of transport, and fellow conservative councillor, said that cameras were 'a blatant tax on motorists' and are being 'used as a cash cow'.

'There are more important things we as a council should do instead of acting as a law-enforcement arm of this Government,' he added.

Swindon's move may be the first time that a council has challenged the Government on speed camera funding.

It comes after changes were introduced to speed camera rules, which meant the Treasury collects money from fines and then redistributes it to councils in road safety grants.

The changes were introduced in part to reduce the perception that cameras were sited only to raise money for councils and not to increase road safety.

Criticism of Swindon council
South Swindon's Labour MP has criticised the council, saying it was 'playing politics with lives'.

She said that removing the cameras could increase the number of accidents and road deaths.

A spokesman for the Department for Transport said that the funding decision was a matter for Swindon, but that 'safety cameras are there to save lives, not to make money'.

'There are 1475 fewer deaths and serious injuries at camera sites each year,' he added.

Swindon council will consider whether to withdraw from its local safety camera partnership by September.