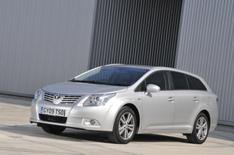 Pouring vodka on your cornflakes might liven up breakfast, but can bring unwanted side effects. Such is the case with the Toyota Avensis.

It is about as exciting as a bowl of cornflakes, but despite the new 2.2-litre engine injecting a drop of the hard stuff, the standard automatic gearbox quickly brings you back to earth with a bump.

Toyota trumpets its 'Optimal Drive' technology, promising more power for better economy and lower emissions, but the automatic gearbox dulls the effects, and emissions of 174g/km and average fuel consumption of 42.8mpg aren't dazzling. The engine is noisy, too, chugging at idle and only quietening at higher speeds.

Changing gear using the steering wheel-mounted paddles adds a racetrack thrill that feels out of place in a mid-range estate car. We'd suggest leaving the slick-shifting gearbox to its own devices.

The Avensis looks good, drives well and offers a lot of kit for the money, but unless you must have an automatic 'box and a little extra pulling power, we'd take a teetotal approach and order the more economical 2.0-litre version. AJ-F