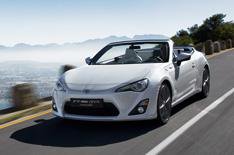 This is the Toyota FT-86 Open concept car that has made its debut at the Geneva motor show.

The FT-86 Open is a four-seat convertible that uses the same platform, 2.0-litre boxer engine and six-speed manual gearbox as the GT86 coupe.

It has a fabric roof and a glass rear window that folds behind the back seats.

The concept car uses the same dashboard as the GT86, with blue and white leather and yellow details.

Toyota claims it will use the concept car to see whether a soft-top GT86 would be viable as a production car.

The GT86's frameless doors and overall structural strength mean that losing the roof should not significantly affect the driving experience.

We estimate that a convertible version of the GT86 would cost around 3000 more than the coupe, giving a starting price of 28,000.