More for you |
DVLA warns of 20% increase in car scamsWhat Car?'s top 10 used electric cars (and the one to avoid)10 most unreliable SUVsWhat Car?'s best cars for less than £250 per monthGuaranteed discounts on our 2020 Award winners - save up to £19,366
Home
News
Toyota Prius+ review
news 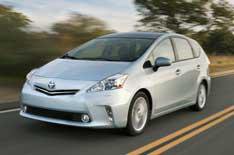 What is it? Toyotas first hybrid MPV, the Prius+, is exactly as it sounds: a car bearing all the characteristics of a Prius, but scaled up to provide accommodation for seven people.

Toyota would like you to think they could all be adults but, in keeping with the class norm, the rear seats are best left to children.

The powertrain uses the same 1.8-litre petrol engine as the Prius, but has a new lithium-ion battery pack to provide a bigger boost to this heavier car.

Despite this change, you cannot recharge the Prius+ from the mains, nor is there any talk of a plug-in version being imminent.

Whats it like to drive? The combination of Prius and MPV was never going to excite enthusiasts, but Toyota has done a respectable job with the Prius+.

Its steering is precise and its suspension, while soft, is sufficiently controlled to keep the handling predictable.

Unfortunately the petrol engine often has to work very hard to provide even adequate performance, an issue exacerbated by the continuously variable transmission that makes all Prius versions noisy when accelerating.

Fuel economy and CO2 emissions are estimated at 65.7mpg and 99g/km of CO2: Toyota describes this as 'class-leading environmental performance', with some justification.

Whats it like inside? The relentless pervasion of pale grey apart, the Prius+ has a lot to offer the mid-sized MPV shopper.

Less innovative than a Citroen Grand C4 Picasso it might be, but youll not fault the interior packaging, thanks to surprising mid-row legroom and the fact theres a 200-litre boot even with the third row of seats in position.

The Prius+ loses little to the opposition in terms of flexibility: there are three middle row seats, each of which slides, reclines and folds flat. Each of the two third-row seats can be independently stowed, too.

Only stowage space disappoints. Toyota has packaged the lithium-ion battery pack vertically between the front seats: this stops it impinging on space in the back, but means that where you might expect a cavernous hold-all cubby, theres just room for a shallow box.

The door bins are also small, but at least six out of the potential seven occupants have their own cupholder.

Should I buy one? Possibly. Theres no shortage of able opposition in this market and, with prices likely to span the 25,000-30,000 bracket, the Prius+ isn't going to be cheap. However, it is a well executed, thoughtfully conceived and generally effective family hold-all that, if it really does live up to its makers lofty claims at the pumps, will provide it with a compelling USP.

Its problem is that a high-torque diesel engine is a better source of power for this kind of car than a small petrol hybrid, and the market isn't short of able competitors powered this way.

Toyota says the Prius+ is aimed at people whod like a Prius, but need more space. We reckon these people will be satisfied, but expect more typical MPV buyers looking for the most effective seven-seat MPV to be less convinced.