Hot hatches don't come more fast and furious than the Audi RS3 and Mercedes-AMG A45, but which one makes the most sense at two years old? We've got the answer... 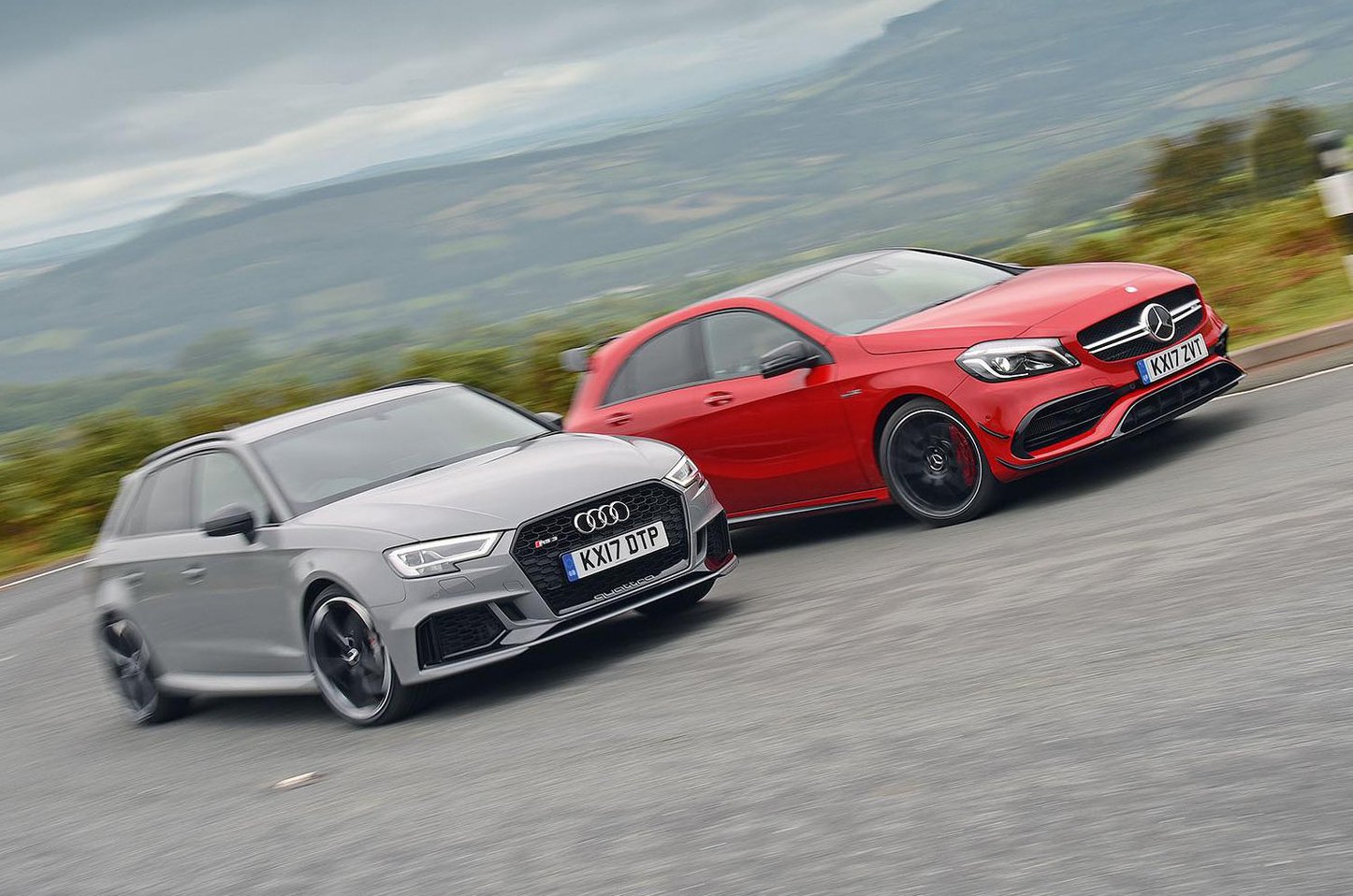 The RS3 was once the world’s most powerful hot hatch; its five-cylinder engine dominates its character.

An A-Class on steroids,with a potent 2.0-litre turbo engine and four-wheel drive to take on the RS3.

* Price today is based on a 2017 model with average mileage and full service history, correct at time of writing

At what point do you consider a car to be fast? Not just sprightly or swift, but face-meltingly rapid. It’s a difficult question to answer, because the goalposts, along with our frames of reference, keep moving. For example, in 1991 the iconic Lotus Carlton super-saloon, with its 377bhp six-cylinder engine, was deemed by the tabloids to be “too fast for public safety”. By 2017, you had these two cars on the road, and even the less powerful car in this test, the Mercedes-AMG A45, matched the Lotus’s power and eclipsed it for straight-line speed.

That’s right: thanks to a good old-fashioned arms race headed by Audi and Mercedes-AMG back then, hot hatches became as neck snappingly quick as entry-level supercars from the turn of the millennium. A Ferrari 360 Modena wouldn’t see where the equally powerful Audi RS3 Sportback had gone in a drag race. 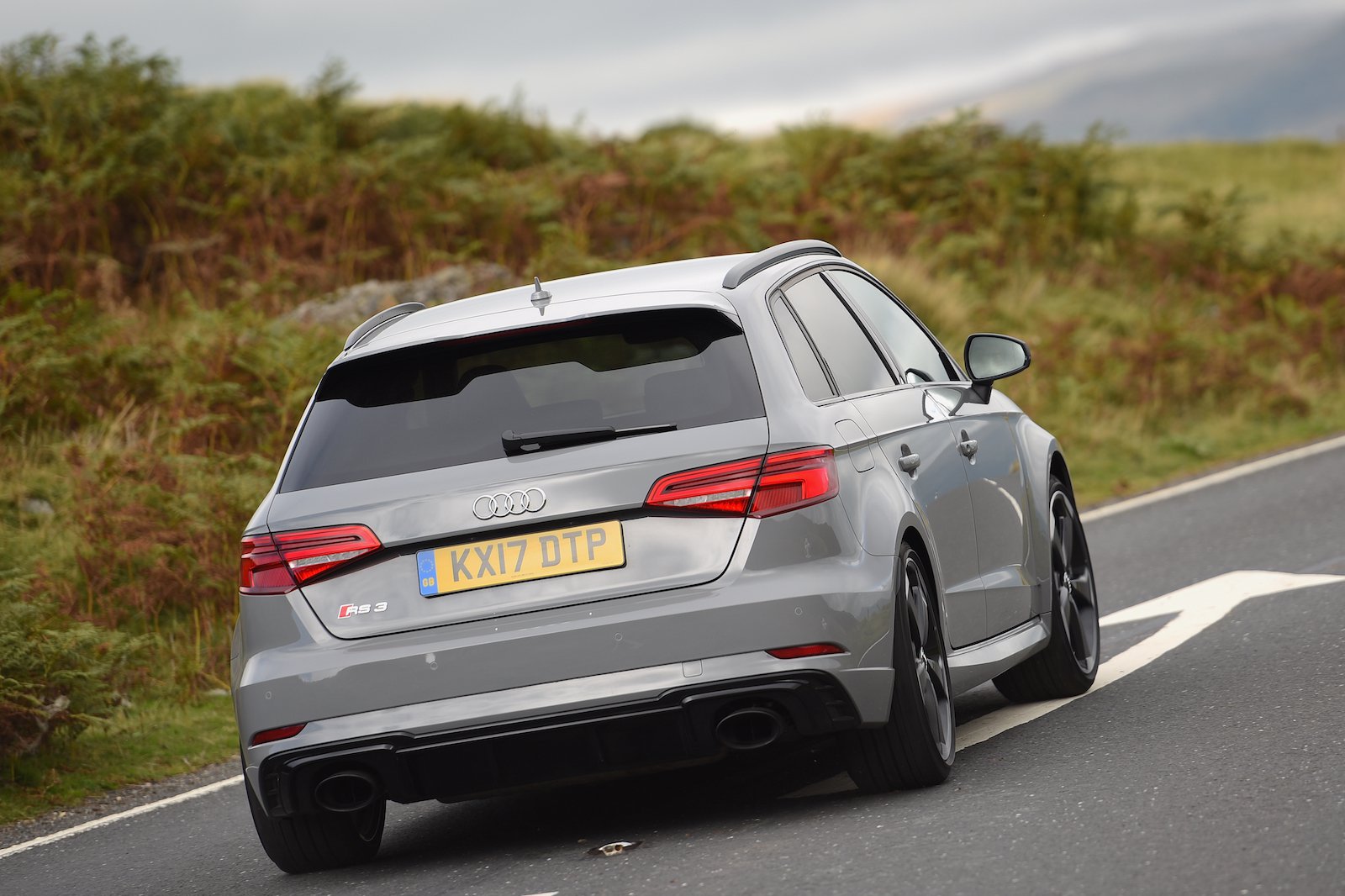 But don’t go thinking these cars are scary or intimidating to drive; far from it. With sophisticated four-wheel-drive systems, advanced electronics and, in the case of the RS3, optional carbon-ceramic front brakes, these mega hatches should be super-secure, no matter what the weather.

Now, you can get all this power for even less money by buying them used. Here, we’ve taken both cars at a couple of years old and pitched them head-to-head. Which one of them is capable of plastering the bigger grin on your face? Read on to find out.

In a world full of speed cameras, bumbling cyclists and seemingly endless traffic jams, the likelihood of being able to exploit either car’s full potential very often is slim. And yet, like owning a pen that can write in space, or wearing a watch that can function at 4000m under the sea, it’s nice to know that, in theory, your car can perform mind-warping miracles – ‘miracle’ being an apt word to describe the otherworldly performance of the RS3.

Powered by a charismatic 2.5-litre five-cylinder engine, the RS3 rockets from 0-60mph in a scarcely believable 3.9sec. Visceral savagery at its finest, the RS3’s monster power delivery relegates this particular turbocharged 2.0-litre A45 to second best. Not that 0-60mph in 4.4sec could ever be considered slow. Both cars have quick-shifting dual-clutch automatic gearboxes, with the A45’s being slightly sharper on downshifts. 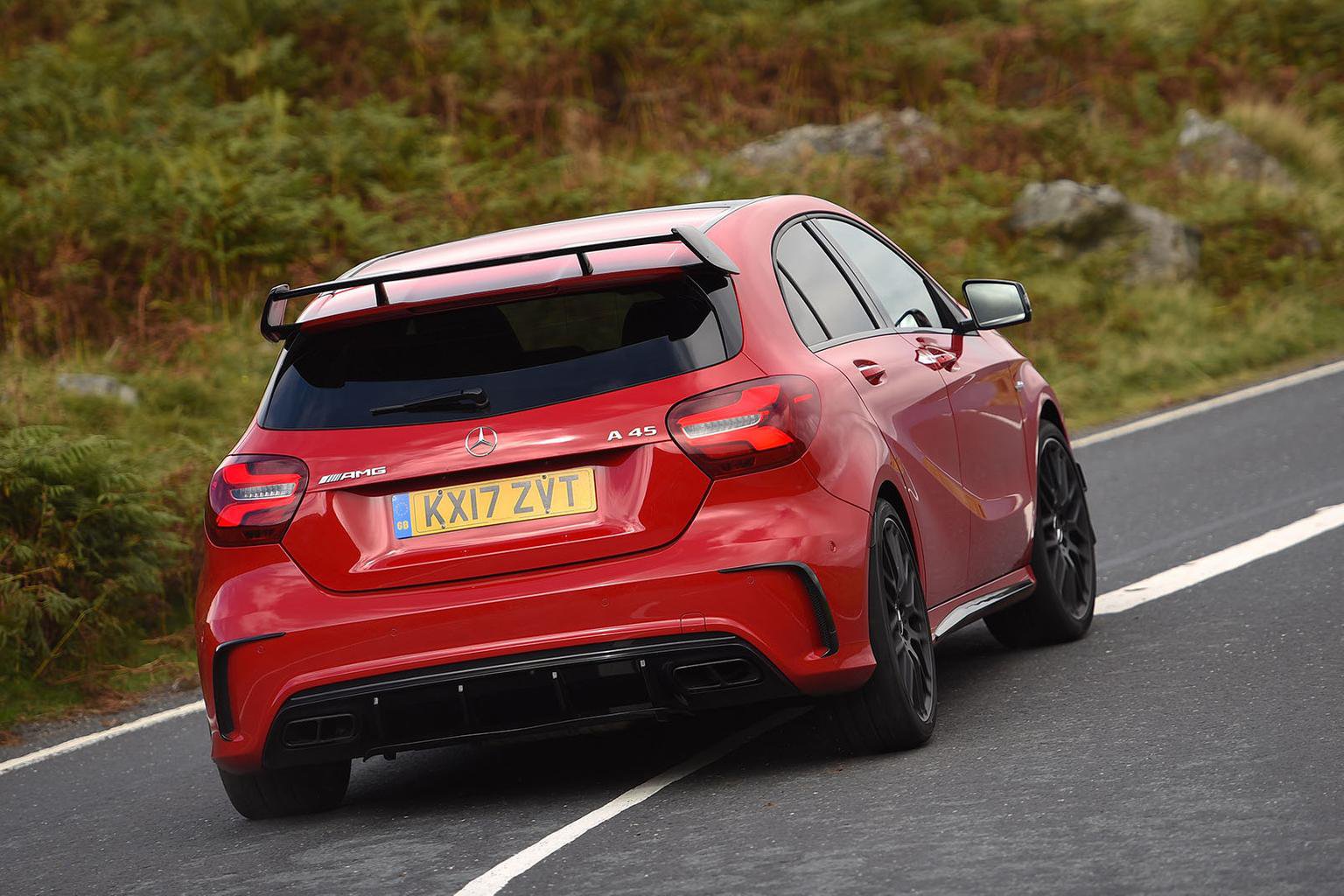 The RS3 may be quicker in a straight line, but it’s no match for the A45 when it comes to handling. With slightly vague steering and grabby brakes, the RS3 is more of a blunt instrument than the delicate A45, wanting to run wide through corners and therefore sapping confidence. The A45 is easy to place exactly where you want it, thanks to a responsive front end and feelsome, precise steering. As a result, the A45 produced the quicker lap time around our 0.9mile test track.

The A45’s intrinsic balance makes it a lovely thing to guide down a twisty B-road, yet it also deals with sharp-edged potholes significantly better than the regular A-Class, thanks to the well-judged adaptive suspension (a £595 option when new) fitted to our test car. The RS3 is far firmer on its standard sports suspension, although ride comfort remains well on the right side of acceptable for such a focused hot hatch. Adaptive suspension was available on the new car for £995.