* Posh supermini due in 2013 * Could herald the start of a new sub-brand * Part of a growing trend from car makers... 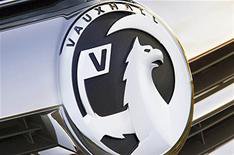 Vauxhall will launch a premium supermini to rival the likes of the Citroen DS3.

The small car, due in 2013, could herald a new sub-brand for Vauxhall, similar to Citroen's upmarket DS range.

Citroen has the DS3 supermini, the DS4 which we have just driven and the DS5, revealed at the recent Shanghai motor show.

Vauxhall looks to be following a trend by car makers alongside Citroen's DS, Fiat has its sporty Abarth sub-brand.

BMW recently launched its i sub-brand for its electric cars, i3 and the i8, and Hyundai is also considering launching a sub-brand.

Whats the benefit of a sub-brand?
Alex Brownsell, from Marketing explains: 'Car makers are trying to seem to be both mass market and upmarket. There has been a gentle nudging upwards with mass-marketed cars, but there is only so far upmarket they can go.

'So these sub-brands are used for a halo effect, by associating with and giving credibility to the mainstream.'