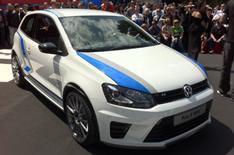 Volkswagen has unveiled a concept car that previews the Polo R hot hatch, which is due to go on sale in late 2013.

The Polo WRC Street concept car was created for the annual VW car festival in Worthersee, Austria, and takes its inspiration from the Polo rally car that will compete in next year's World Rally Championship.

The WRC Street has big alloy wheels and a bodykit that includes a tailgate spoiler and a rear diffuser, plus its body graphics mirror those of the rally car.

The production version of the Polo R will be a rival for the next-generation Renault Clio Renaultsport 200 Cup and Mini Cooper S John Cooper Works, which are likely to go on sale at around the same time.

Also on display at the Worthersee show was the production version of the Golf GTI Cabriolet, which is on sale now, priced from 29,310, and two GTI hatchback concept models: the GTI Black Dynamic and the GTI White Concept.

The Black Dynamic was created by Volkswagen apprentices, and features a 355bhp engine and an 1800-watt stereo, while the White Concept has matte white paint and a black and red interior.