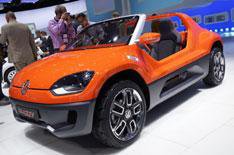 Volkswagen has unveiled a whole family of models based on its new Up supermini at Frankfurt.

Cross Up
The Cross Up shows how the 5dr version of the Up will look. Strip away the Cross Ups SUV-style body cladding and what you get is the more versatile 5dr Up that will go on sale in 2012.

GT Up
The GT Up gives a good idea of what an Up GTI would look like. VW says that the GT could conceivably has a 99bhp engine and that a production version would be very much in the style of the ancestor of the sporty small car the first generation (Golf) GTI.

The car is inspired by luxury yachts and has no roof or doors. The interior has four white-blue leather seats and mahogany and maple wood trim.

Buggy Up
The Buggy Up is a concept car inspired by the classic VW Beetle-based beach buggies of the 1960s.

Unlike those plastic-bodied cars, however, the Buggy Up has a steel body. The styling is very different from the Up hatchback models, with no side doors and an open roof section.

At this stage, the new Up models are only concepts, but a five-door model is due early in 2012. We wouldnt expect production version of the Azzerra Sailing Team or Buggy Up, but the GT Up suggests that an Up GTI is a possibility.