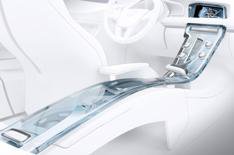 This is the first official picture showing hints as to how the next Volvo S60 will look. (Click here for a larger version.)

The image shows the floating centre column of the concept car, which will be unveiled at the Detroit motor show in January.

The column is made of glass crystal in the concept car, although the production cars version will be made of more mundane materials.

Features being considered for the production car, which is expected to go on sale in early 2009, include the new-shape gear selector, which stays horizontal in automatic mode but flips to vertical when in use as a manual.

A starter button and an electronic parking brake can also be seen in the image.

Volvo has said it will investigate using glass crystal in smaller quantities on production cars in the future.