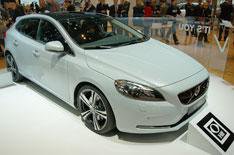 The new Volvo V40 could have been overshadowed at Geneva by heavyweights such as the Audi A3 and Mercedes A-Class. However, we came away impressed with the new Swedish model, which has swoopy good looks and a cabin that's right up there with the best of its German rivals'.

The V40 will cost from around 19,000, and will be offered with turbocharged 1.6-litre petrol engines, a 1.6-litre diesel and Volvos characterful 2.0-litre five-cylinder diesels.

The front of the interior is impressive, with a fine choice of materials, plenty of the solid switchgear from the (more expensive) S60, an illuminated gearknob and Volvos trademark floating console, with storage space behind it.

Its not quite so assured in the rear, mind you; there's less headroom than in the new Mercedes A-Class although it's better than in a BMW 1 Series.

The V40 is due to go on sale in August; its a massive car for Volvo, which badly needs to rack up sales from small-hatchback buyers who would otherwise default to a German manufacturer. Its early days, but we reckon the V40 could be a strong enough proposition to fulfil that role.