Will UK get Renault's Latitude?

* New upmarket saloon * To be revealed at Paris motor show * No decision yet on UK release... 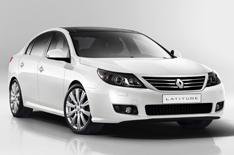 This is Renault's new upmarket Latitude, which will make its first European appearance at the Paris motor show in September.

The flagship Renault is bigger than the Laguna and is designed to put comfort, convenience and class at the top of the agenda.

It has triple-zone air-conditioning, a massaging driver's seat, a Bose stereo and hands-free entry and engine start.

Once-bitten
The Latitude will go on sale in various countries from the autumn, but no decision has yet been taken on whether Renault will bring it to the UK.

The company's previous executive car, the Vel Satis, was unsuccessful just over 100 of the cars were sold in its final year on sale in the UK.

It has also been difficult for other big French saloons in the UK: Peugeot no longer sells the 607, while Citroen C6s are scarce on the roads.

A decision on whether to sell the Latitude here will be taken in the next few months. If it does arrive it's likely to cost from around 24,000.