While you may take one look at used Nissan Navara and assume that it’s just another unsophisticated pick-up truck, you’d actually be quite wrong. The Navara shares quite a lot with the Mercedes X-Class, which is why this generation of Navara has a plusher interior than before and fancier rear suspension than most work trucks, all in order to give it a touch of sophistication not often found in this class.

There are two body styles available: a king cab model with a longer load bed, and a double cab with a slightly shorter bed but a bigger body that provides more interior space and seating for five. The 2.3-litre, four-cylinder diesel engine can be found as either a 160bhp model with a single-turbocharger,  or a twin-turbo 188bhp version. A six-speed manual is standard but the ratios are fairly short (this has been addressed with an improved manual gearbox added from 2019 onwards) and the lever is unpleasant to use; the seven-speed automatic available on more powerful Navara is a little bit more enjoyable to use.

When it comes to handling, the Navara certainly isn’t as tidy in the bends as its Mitsubishi L200 rival. The steering is very truck-like and heavy, requiring much arm-twirling in parking manoeuvres because of its low-geared rack. Body roll is pronounced in corners, and – despite double cab versions having more sophisticated, car-like rear suspension than pick-ups normally come with – it’ll still jostle you over battered Tarmac at low-speeds, although to a lesser degree than most pick-ups. Once there’s a bit of weight in the back or you’ve reached cruising speed on the motorway, things do settle down.

King cab Navaras have rear-hinged back doors and temporary flip down seating in the rear; they're not suitable for transporting passengers over long distances. The double cab is much better for all and there won’t be any complaints about the level of adjustment to the driving position, either. There’s even some tactile soft-touch material on the dashboard, which is a bit of a rarity on something that is essentially a working vehicle.

The Navara is good news if you need decent cargo carrying capacity – among double-cab pick-ups, it has the longest bed in the business.  We measured the bed to be 1590mm long, 485mm deep with a width of 1550 at its widest point, and 1110mm at its narrowest between the wheel arches. The tailgate opening is 1360mm, so it should have no trouble taking a standard size UK pallet. 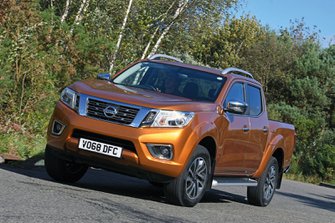