Way back in 2003 the very first Porsche Cayenne, a plug-ugly two-tonne SUV from the makers of some of the world’s finest and most desirable sports cars, caused quite a stir. Those who hated its looks were almost as prevalent as those who rushed to the showrooms to buy one. It sold in large numbers, and rapidly became Porsche’s biggest seller, as did its replacement, the second-generation version, launched in 2010.

Not surprisingly, Porsche didn’t muck around with the formula when it launched this third generation version, despite which it boasts new engines, a whole new chassis and a totally overhauled interior. Utilising a Volkswagen group platform, shared with such other notable SUVs as the Audi Q7, the Audi Q8 and the Bentley Bentayga, the latest Cayenne also uses aluminium in much of its structure, to keep the weight down.

It works: the Cayenne is lighter than most of its rivals, and allied to that relative lightness there’s a range of strong engines too: a 3.0-litre turbo V6, a 2.9-litre twin-turbo V6 S version, a petrol-electric hybrid, while the twin-turbo V8 Turbo car tops the range.

Trim-wise, you get a reasonable amount of kit on the standard Cayenne. This includes a 12.3in infotainment system with sat-nav and Apple CarPlay, LED headlights, cruise control, two-zone climate control and an electric tailgate. It’s likely that the original owner will have added a few options, such as full leather seats and air suspension. The E-Hybrid and S versions are pricier, both new and used, but you don’t get a huge amount of extra equipment. The Turbo model gets more toys, including air suspension as standard, but it is an awful lot more expensive.

On the road, that weight reduction means excellent performance. The 3.0 V6 is the slowest, and even that can see off the 0 to 62mph dash in under 6 seconds. The 2.9 S is faster still and can hit 164mph in top speed, while the bonkers Turbo model can see off 0 to 62mph in a supercar-fast 4.1 seconds and go on to 177mph.

Approach a corner and you’ll find that the Cayenne corners very nicely, thank you very much, despite its size. It’s even better on the optional air suspension, which tightens everything up. Grip levels are high, and body lean is low. It rides pretty well, too. The standard Cayenne, E-Hybrid and S models come with steel springs as standard. It’s a softer set-up than what you might expect, but that, unfortunately, doesn’t stop the car from thumping over potholes and expansion joints. We wouldn’t go as far as to say it is uncomfortable, but it lacks the compliance you expect from a large SUV. Therefore, we’d recommend you look for a car equipped with the optional air suspension (it’s standard on the range-topping Turbo model). In Comfort mode, the ride remains relatively firm, but it never crashes or bangs like the standard steel set-up. In fact, you hear the impacts more than you feel them – a common trait of air suspension.

Inside, all is leathery plushness, and the driving position is excellent, with plenty of electrical adjustment. Visibility is good, and a rear-view camera is standard. The fit and finish are both excellent, too, and all the major controls, including temperature and fan, are easy to find. Some of the minor controls are a little trickier as they are icons on a touch-sensitive panel. They are responsive enough, but you can’t feel your way around, so you have to look down from the road more than is ideal. All Cayennes get a giant 12.3in touchscreen in the centre of the dashboard. It has sharp graphics, is responsive to touches and swipes, and rarely has any lag unless you’re zooming in and out of maps quickly. Most icons are a decent size, although some of the menus are a little small.

Space front and rear is excellent, too, with plenty of room for six-footers in the rear seats. Those rear seats can be slid backward and forwards as need, for extra practicality, and the boot is large and square and easy to access via an electrical tailgate. 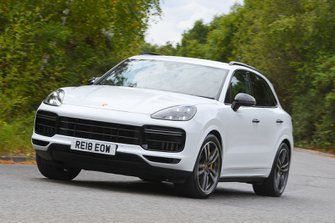