The Renault Mégane has been around in various forms for a very long time, but it’s fair to say that – sporty Renault Sport versions aside – it’s never quite caught on with the UK buying public in the way the French firm had hoped.

This has perhaps been more to do with the quality of its rivals than any serious faults in the Mégane, because it’s always been a decent car to drive and one with its own unique style.

The fourth-generation model was launched in 2016 and, as well as a bold new look outside, it incorporated a sleek and high-tech interior laden with safety kit and executive toys. The car is larger – being longer, lower and wider – and considerably more sophisticated than previous Méganes.

It drives well, too, with a good range of engines that encompass a lively 128bhp 1.2-litre petrol unit and a super-quick 1.6, as well as a trio of diesel options that includes the economical 1.5-litre dCi 110 and the punchy yet abstemious 1.6 dCi 130. There’s also a higher-powered 1.6-litre diesel that combines speed with reasonably good fuel consumption. Later models were whittled down to just a 1.3-litre TCE 130 petrol and 1.5-litre dCi 115 diesel engine.

Where the Megane excels is the amount of equipment you get compared with its rivals. Even the entry-level Expression+ gets cruise control, air-con, DAB radio and Bluetooth. You also get driver’s seat height and lumbar adjustment.

The Dynamique Nav model has swish night-time ambient interior lighting, power-folding door mirrors and dual-zone climate control. You also get keyless entry, a configurable 7.0in digital display in place of analogue instruments, and a 7.0in touchscreen for the infotainment system that comes equipped with sat-nav. There are also important safety features such as a system to warn you if you drift out of your lane, auto-sensing lights and wipers, automatic headlamp dipping, rear parking sensors and speed limit display.

The GT Line Nav trim adds a sportier theme to the above, with dark-chrome door mirror casings and more aggressive bumpers outside, plus sports seats inside. Dynamique S Nav trim adds the 8.7in infotainment screen, front parking sensors and a rear-view camera; Signature Nav augments that with 18in alloy wheels, LED headlights and leather seat trim.

The range-topping GT Nav is available only in the earlier models with the sportier 1.6 205 petrol engine. A seven-speed automatic gearbox was standard, as well as more macho-looking exterior styling and sports seats inside. The rest of the specification largely mirrors that of the Dynamique S Nav model.

The entry-level 1.2-litre petrol is fine for town driving and shorter journeys, but you need to work it quite hard for motorway trips, making it rather a noisy unit. The diesel engines better suit more robust use. The 1.5-litre diesel unit has similar power to its rivals, but it feels slower in real-world driving compared with a Seat Leon 1.6 TDI 110 or Vauxhall Astra 1.6 CDTi, because the Mégane weighs more. It sounds quiet, even when worked hard, but you do feel the engine’s vibrations buzzing through the pedals.

The 1.6 130 diesel is a good fit, offering flexible performance (without being quick) and relative refinement, plus it’s a smooth runner on motorway journeys. It isn’t the most refined diesel engine in this class, and you will still get a harsh engine note if you push it hard. The more powerful version of the 1.6-litre diesel is quick but less economical and not very refined.

The range-topping 1.6-litre petrol comes in the GT Nav trim only and is matched with a seven-speed dual-clutch automatic gearbox. It’s a warm hatch model designed to compete with cars such as the Ford Focus ST and Peugeot 308 GTi. However, on the road, it feels a little flat and is quite thrashy when revved hard. That auto 'box changes slickly but is occasionally hesitant when changing gear manually with the steering wheel paddles.

Underneath was a new platform that contributed to the car’s improved road behaviour. The Mégane is still set up on the soft side, however, and although the ride is initially comfortable the car can roll in corners and doesn’t like to be hustled around too quickly.

Inside, there’s plenty of space up front, as well as a good and adjustable driving position. Passengers in the rear will feel a little cramped behind a taller driver, though, with less leg room available than in some of the Mégane’s rivals. Likewise, the boot is a good size, but overall capacity is slightly below what is offered by the best in this class.

The interior’s a good and modern place to be, even if some of the functions controlled via the infotainment screen can be a little fiddly to use, and there’s a range of well-equipped trims to seek out.

Ultimately, the Mégane fails to make a dent in the supremacy of its rivals, but it’s a smart and desirable car that will serve many people’s needs well, and there are now quite a few on the used car market at temptingly low prices.

If you're interested in buying a used Renault Megane, or any of the other cars mentioned here, head over to our used car classifieds site here. 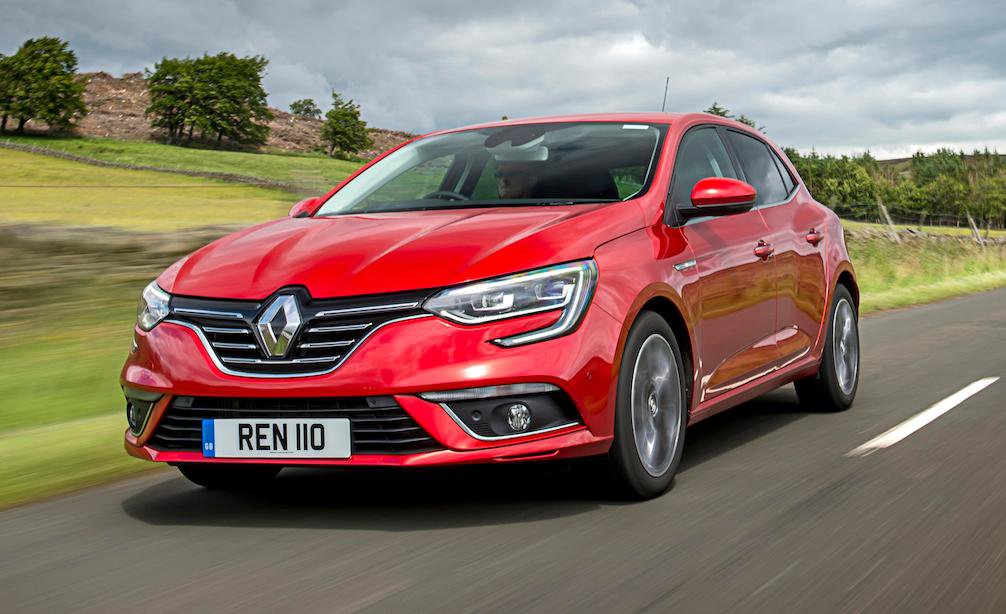